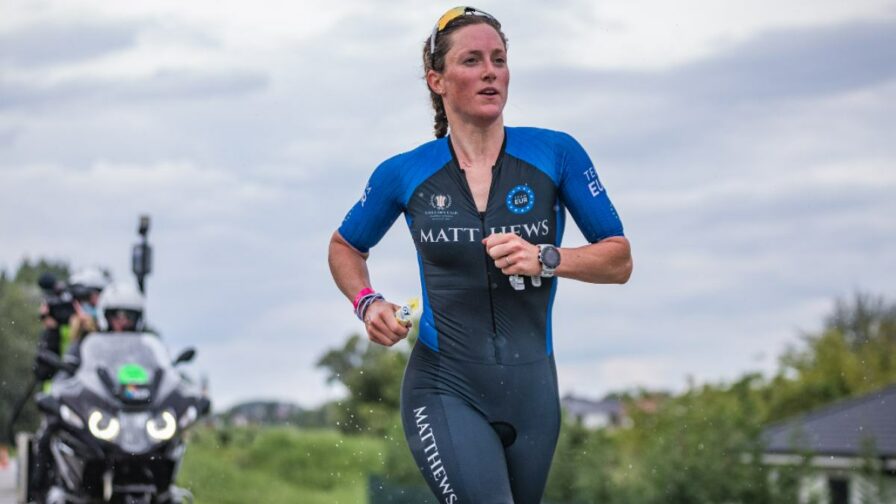 Katrina Matthews believes she can prosper more over middle distance in the coming years – with one major caveat.

The British star showcased her ability by helping Team Europe to Collins Cup glory in Slovakia on Saturday as she overcame Jocelyn McCauley and Carrie Lester to claim an important 5.5 points.

Matthews in the middle

Katrina produced a decisive run leg to overhaul McCauley and come home more than five minutes in front in a time of 3:35:17. Afterwards she spoke of her middle-distance potential, which some may be underestimating. There is though one area where she admits improvement is absolutely needed.

“I really feel over the next couple of years I have a lot to give at middle-distance as long as I can get my swim into better shape because it’s just not competitive as it is.”

One feature of the Collins Cup was athletes racing hard right to the line in every race, thanks to the bonus point system which offered extra reward based on the time gap between competitors.

One thing which did surprise Katrina was how long it took her to pass McCauley – she was behind coming out of the water and Jocelyn maintained the gap on the bike.

“I just didn’t close that gap on the bike, and I really thought I would. I’m not sure, I have many things I think it could be down to. There’s no excuses, Jocelyn was a better cyclist on the day.

“I’m just glad that I maintained the head space to keep the gap as it was, therefore giving me that capacity on the run. So yeah, much tougher.

“I think Natascha’s role has been a holistic mentoring role,” she said.

“She’s brought the team together as a whole rather than be the one key leader. There’s a lot of very, very good athletes obviously in Europe. I think we’ve really bounced off each other as well as Natascha to have a really good team bond. I was cheering Daniela on on the course, it was great as a team.

“And then obviously having her in transition, and actually doing splits to determine those last few bonus points, that was her telling me to hurry up.”