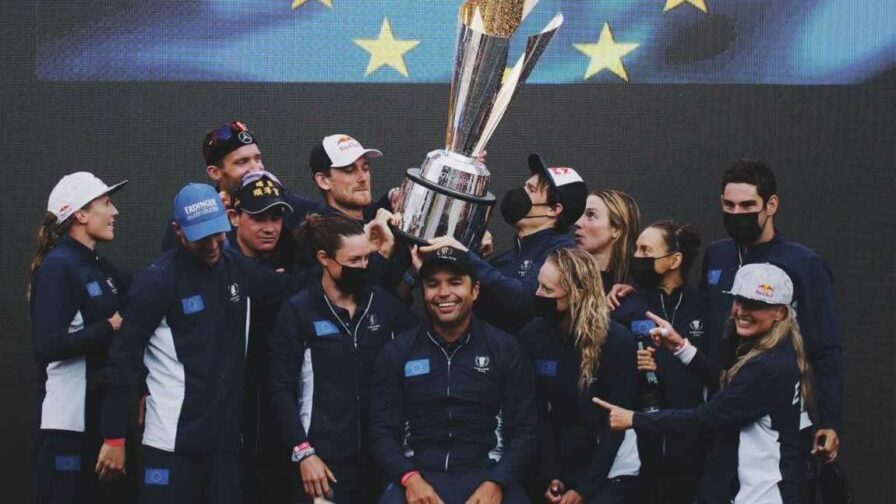 The inaugural Collins Cup took place in Samorin, Slovakia on Saturday August 28, 2021 and when the results were totted up it was Team Europe who claimed the ultimate glory.

But it was not the rout that many had anticipated, with the USA women and the Internationals men in particular making it a pretty interesting showdown for the spectators in Slovakia and a worldwide TV audience.

There were 12 races, each featuring one athlete from Team Europe, Team USA and Team Internationals. Six races featuring women and six featuring men.

The winner of each race received 3 points, with the runner-up getting 2 and the third-place finisher 1.

There was also a bonus points system for the finishing margin between athletes:

An astonishing start to the first ever Collins Cup, with 23-year-old American Knibb claiming a full six-point haul by simply destroying the GOAT herself Daniela Ryf as well as Teresa Adam.

Knibb, fresh from a fine second at IRONMAN 70.3 Boulder after her recent Olympic exploits in Tokyo, came out of the water 1:18 ahead of Ryf, but eyes were then well and truly opened as she blitzed her opponents on the bike (a road bike to be exact) as well. Her terrific 1:52:16 split was more than seven minutes faster than Daniela.

Knibb continued to surge even further clear on the run, eventually finishing more than 16 (SIXTEEN) minutes clear of Ryf, with Adam just under 23 minutes off the pace in third.

It later transpired that Ryf had woken on raceday feeling unwell, but despite that this was some performance from Knibb to get the unheralded USA team off to an unexpectedly perfect start.

Zaferes was right with Lucy throughout the swim, and led early on the bike after taking the advantage during T1. But Charles-Barclay passed her about 15km in and it was a lead the British star never relinquished. Lucy poured it on in the closing stages to maximise her points haul.

Findlay made a concerted effort to try to claim second from Zaferes in the closing stages but could not bridge the gap.

A superb performance from Hering to provide another victory for Team USA as it really outperformed expectations in the early going.

Haug recovered somewhat from an average swim and mechanical problems on the bike, but she could not get the finishing margin down to under two minutes to deny Hering a bonus half-point.

The eagerly-awaited showdown between Lawrence and Salthouse (remember ‘karma is a b**ch’ anybody?) delivered in style until a disastrous crash late in the bike leg for Lawrence.

Holly hit the deck right in front of her Australian rival, and despite bouncing up to continue with blood streaming from her arm, mechanical damage resulted in a ton of lost time which destroyed her chances of continuing the epic battle.

It was a major disappointment not just for Holly but also for the global TV audience, who had been treated to an incredible spectacle as the pair powered through the waters of the Danube literally side by side during the swim.

Lawrence was able at least to keep Salthouse’s winning margin down to under six minutes, denying the Australian another bonus.

Pallant-Browne justified her selection by continuing her red-hot summer form with an excellent success, scoring by just over a minute from Chelsea Sodaro.

Emma had notched recent victories in Boulder and at Alcatraz, and she dominated again here, posting the fastest swim and run splits of the trio and sharing the fastest bike split with Sodaro.

Matthews was another European Captain’s Pick to come good in justifying her selection with an impressive success in the final women’s race of the day.

Kat came out of the water just under two minutes back from leader McCauley, and the pair then produced almost identical bike splits.

Matthews though produced a blistering run of 1:04:56 to overhaul the American and come home more than five minutes in front.

While Ryf’s expected victory was ruined by illness, Frodeno did what the script said he would, but it wasn’t a complete stroll for the best long-distance racer around.

Appleton stuck doggedly to his task, coming out of the water just 24 seconds behind Frodeno and then bettering the German’s bike split by three seconds.

Frodeno though really showed his dominance on the run, surging clear to win by more than four minutes. Appleton was good enough to hold off Sam Long for second – reversing the placings from their recent meeting in Boulder.

Iden has already shown off his middle-distance credentials on more than one occasion – notably that IRONMAN 70.3 World Championship win in 2019 and then the PTO 2020 Championship success last December.

The Norwegian was again super-impressive here, coming home more than seven minutes in front of late replacement Collin Chartier – who stepped in for Rudy Von Berg at the 11th hour.

It was a 58:05 run which separated Iden from his rivals in the end, as he surged clear on the final leg to register a comprehensive victory.

Just six days out from finishing second at IRONMAN Copenhagen, Sanders showed that there are indeed ‘No Limits’ as he claimed victory over old rival Kienle to give Team Internationals their second win of the day.

The Canadian produced an excellent swim to come out of the water just three seconds behind Starykowicz with Kienle more than a minute further back.

Sanders and Starykowicz were again pretty much neck and neck on the bike (despite the former hitting the deck at one stage), before Lionel finally took control on the run to come home just over a minute clear of the American.

Baekkegard wrote himself into a little piece of triathlon history as he clinched the inaugural Collins Cup for Europe with a thrilling victory over American Ben Kanute.

The pair fought a terrific battle for most of the afternoon in Slovakia before the Dane asserted on the run leg, coming home in 58:57 to claim victory by just under a minute.

Currie produced a dominant performance to give Internationals their third success of the day as he comprehensively outpointed Hanson and Lange in terrific style.

The 35-year-old Kiwi was in brilliant form as he set the tone in the opening swim and then held onto his advantage throughout the afternoon.

This one had plenty of spice, after those “leftover” comments from Jackson Laundry aimed at Joe Skipper earlier in the week.

And the Canadian backed up the smack talk in the end, but it wasn’t easy as he took until deep into the run before overhauling the Brit to claim victory in the closing race of the day.

Skipper had produced a terrific bike split to put himself in position to shock his opponents, but Laundry’s closing kick was just too strong as Internationals claimed their fourth victory of the afternoon.