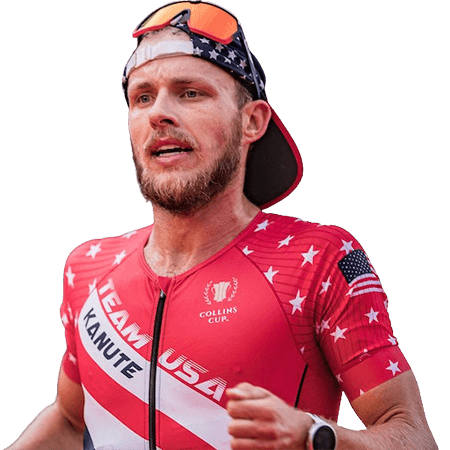 Ben Kanute’s long-distance triathlon career looks to be back on the up after powering his way into the world’s top 10.

The 29-year-old American rose from 47th to eighth in the rankings during 2021 and will look to build on that progress during 2022.

Ranked as the sport’s third best swimmer by the PTO Rankings, Kanute was bitten by the triathlon bug at the age of just seven after watching his father Mike compete. He initially emerged as an Olympic-distance triathlete and finished 29th at the Rio Games in 2016 before stepping up in distance the following year.

Although disappointed not to secure a place in the Mixed Relay at last year’s Tokyo Olympics, Kanute still enjoyed three podium places and three further top-10 finishes during 2021.

Born in December 1992, the University of Arizona graduate is coached by Jim Vance and a promising junior career saw him crowned elite national champion in 2007, 2008 and 2010.

Following his Olympic debut, Ben showed he had the stamina to step up in distance during a breakthrough 2017 season. Having finished third in his first IRONMAN 70.3 race in Puerto Rico, Kanute took a hugely impressive second place at the IRONMAN 70.3 World Championship that year.

Kanute has finished in the top 10 on each occasion he has competed in the IRONMAN 70.3 World Championship, but has yet to climb to the top step of the podium in the biggest middle-distance race of the year. His finest performance when claiming a brilliant second behind triathlon legend Javier Gomez in 2017.

With victories in the smaller Escape from Alcatraz and Island House events, 2017 proved a highly promising one for Kanute, and the following year he retained his Alcatraz title and recorded his first IRONMAN 70.3 victory, triumphing in Texas.

Fourth at the 2018 IRONMAN 70.3 World Championship, Ben was beaten by three all-time greats in Jan Frodeno, Alistair Brownlee and the aforementioned Gomez, in a race widely regarded as one of the greatest of all time.

Kanute secured a second IRONMAN 70.3 title in California in 2019, pipping compatriot Rudy Von Berg in a thriller by just 12 seconds. He added sixth at IRONMAN 70.3 Bahrain and 10th at the 70.3 World Championship in Nice after a disappointing run which saw him record only the 34th fastest split.

Kanute was restricted to just three races due to COVID-19 in 2020, including 20th place at the PTO 2020 Championship in Daytona, as his ranking dipped to 47th. But he would bounce back in style in 2021.

He registered another victory at IRONMAN 70.3 California, posting top-three splits in all three disciplines. Kanute was second at IRONMAN 70.3 Texas, third at Challenge Miami (02:31:44) and posted the fourth fastest time of the day at the Collins Cup.

Kanute capped his best year to date with sixth place at the IRONMAN 70.3 World Championship in St George.

Ben’s father Mike Kanute was also a triathlete, as well as a golfer, and Ben’s whole family have been involved in the sport.