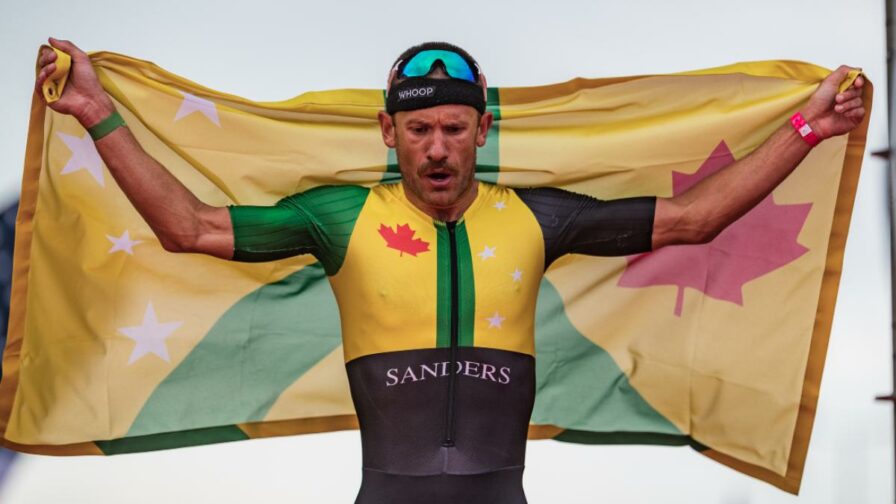 Sebastian Kienle described it as “f***ing incredible” after Lionel Sanders notched a superb victory in their matchup at Saturday’s Collins Cup in Slovakia, such was the level of his achievement.

Sanders lined up in Šamorín just six days after running second at IRONMAN Copenhagen – would he be a lame duck or would ‘No Limits’ stun the world again?

The answer was definitely the latter as the 33-year-old Canadian pulled clear of Andrew Starykowicz on the run to win by just over a minute in a time of 3:19:17.

Afterwards Sanders admitted that his insane turnaround from Denmark had definitely taken a toll, admitting: “It’s not good for your running – I can tell you that much. My run legs felt horrible right from the get-go and I knew I just had to minimise my losses. I just ran within myself, I stayed on top of the nutrition – that’s all I could really do.

“I said to myself, if he catches me there’s nothing I can really do about it. If he catches me and he wants to fight, I’ll fight him. Fortunately I didn’t have to resort to those deep deep measures.”

Sanders spoke in detail about how he is continuing to evolve his skills – it was notable after that recent Tri Battle with Jan Frodeno how seeing the German’s finely tuned machine (including his backroom team) opened his eyes yet more.

One area Lionel has put real focus on is his swimming (remember his training with Heather Jackson in that PTO documentary and “Team stop sucking at swimming”?).

On Saturday he stayed with Andrew Starykowicz for most of the swim and exited the water just 10 seconds down in a time of 27:27.

Afterwards he revealed: “To be honest with you, I’m doing everything now the way that I’m learning about swimming.

“Swimming, I don’t even really look at the clock any more – I just focus on the feel, feel for the water. I just did the same today. I don’t ever feel hypoxic in the water any more, I always used to feel hypoxic.”

Lionel also opened up on how he’d approached the cycling on Saturday, that fall which almost wrecked his hopes, and his desire to improve his cycling.

“And so today, I said get rid of the power meter, just use speed. And that’s what I did, I think I biked pretty well. I think that’s the first time I actually kept up with ‘Starky’ completely so I’m pretty happy with that.

“I suck at biking, everybody already knows that – you just saw it there. ‘Starky’ said he could see I was gonna crash long before I was going to crash. He said I was locked-out elbows into the corner, it was wet and I hit the paint.

“To be honest with you, one thing I want to do is go ride with some pro cyclists and learn how to ride, handle the bike better. I have good power, I just suck at applying it properly.”

The next major event on the elite calendar is the IRONMAN 70.3 World Championship in St George on September 18. Sanders though was anything but upbeat concerning his chances after a summer which contained three full-distance races in a gruelling calendar.

He admitted: “On the run felt like an Ironman athlete out there. I felt like I had no gears, nothing. Usually I feel like I always have one more gear. I didn’t really have any more gears.

“I can’t tell if it’s because I did the second-best run of my career six days ago, but I just don’t have the speed. You don’t do any speed and you think all of a sudden you’re gonna run 3:15 per kilometre? It just doesn’t work that way.”

Sanders was renewing his great rivalry with Kienle here, and despite beating the German into second, he still feels there is unfinished business and scores to settle.

“He’s right, he said in the ‘Beyond Human’ documentary, that’s all fine and dandy.

“Don’t get me wrong, this is an amazing race but it’s not Kona. He always beats me there, so I’ve gotta beat him. I beat him in 17 there but usually he beats me. Nine out of 10, he beats me in the big ones so we’ll keep working.”