In an effort to answer the question “Where would Chrissie sit in the fastest GB triathletes” we’ve created a list of the fastest British men.

Regular readers of Tri247 will be aware that your Editor does have more than a passing interest in triathlon statistics, especially of the iron-distance variety.

Having previously written, and subsequently updated, the Fastest British Iron Ladies article (chartng every sub-nine hour 15 minute iron distance finish by British female athletes ever recorded), I wanted to do similar for the British men.

I also left that article with the thought “If Chrissie Wellington has an 8:18:13 finish to her name, where would Chrissie’s best sit in the British men’s ranking?” Here is the answer to that one too…

Starting in 2009 and expanded throughout the last few seasons, I embarked on a project to pull together a variety of iron distance statistics and records. Links to all of the current reference articles can be found at the foot of this article, which variously cover both an International and a British perspective, finishing times and podium positions.

Part of this was for personal desire – I have a natural affinity to numbers, lists and records. When it comes to sports, I generally seem to have pretty good memory for facts and figures too.

However, in relation to some of the information I was keen to find, I was surprised to find that I couldn’t find data sets that I thought surely someone must have done this already? Apparently not. So, I went off and did it myself…

Having already looked at ‘fastest times’ on world level within the Sub-9 (women) and Sub-8 (men) articles, I was keen to investigate that a little further with my British hat on to produce a comprehensive list of the fastest British iron-distance times.

For the British ladies at least, I expanded that here to incorporate a complete historical British sub-9:15 analysis.

And now for the British men. Well, the men and one particularly fast woman. What is collated below is my attempt to list every sub-eight hour 30 minute iron distance finish by British athletes ever recorded.

Before we start – and just for absolute clarity – finishing times in any triathlon, and in Ironman/iron-distance in particular only tell part of a story. Courses are different, conditions are different and depending on who you believe, distances can vary too.

Thus, work such as these listings is only part of an overall story. That said, times are a part of that story! Importantly, time is something that everyone ‘gets’, and being the fastest is a common theme among many sporting disciplines.

At the very top of the speed charts, the British record has been taking a bit of a bashing over the past few years. Tom Lowe broke the then British record of Stephen Bayliss in his first race at the distance in Arizona (2010), and then subsequently knocked a few seconds from that in his second attempt (Ironman Austria 2011).

With his third Ironman resulting in the fastest British men’s performance at Kona to date, you would have to think that Tom has the potential to go faster still – which he did at Challenge Barcelona 2013. Retiring from Ironman racing at the end of 2014 however, that is not going to happen now.

Paul Amey‘s second place at Ironman Arizona 2011 held the top spot on the list for almost five years- until the magic ‘8’ barrier was broken by Joe Skipper at Challenge Roth 2016.

He didn’t beat that record – but Will Clarke has now joined the ‘Sub-8’ club, with 7:59:31 for second place at Ironman Copenhagen 2016. That made him the second fastest British Ironman – and he knocked a few more seconds off of that at Ironman Texas in 2017 too.

While no longer the British record holder, Stephen Bayliss is second only to Joe Skipper in terms of volumes of ‘sub 8:30s’ on this list with seven – including a new personal best (8:13:01) for fifth place (and third in the ETU Champs) at Challenge Roth 2012.

Julian Jenkinson held the British iron-distance record for 13 years from 1995-2008, describing his race in Detern, Germany at the European Iron-Distance Championships as “physically I had the best race of my life. This coincided with undoubtedly the fastest ironman course in the world on a cool deathly calm day that time trialists dream about”.

After triathlon Julian had significant success in cycling time trials – in 2010 he won the National 12-hour Championships (with a whopping 292.49 miles), and collected the British Best All Rounder (BBAR) title. In March 2016 Julian tragically passed away, suffering a fatal heart attack whilst training.

And what of Chrissie Wellington? Her 8:18:13 time from Challenge Roth 2011 is currently the 32nd fastest British time recorded and makes her the 15th fastest British athlete ever. Can she go even faster? Will she even race again at Ironman? No...

Scott Neyedli recorded his third best Ironman time at Arizona (2011) and returned to the Ironman podium as a winner at Ironman Wales 2013, while Graeme Stewart combines racing alongside the day job as a full-time cancer research scientist. That didn’t stopped him regaining the Scottish iron-distance record at Challenge Barcelona 2013 – though that has now been taken over by Ritchie Nicholls… and now by David McNamee!

Skipper is certainly a star on the rise, his second place at Ironman Texas 2015 (North American Championships), was a massive breakthrough. As well as taking second place (with a monster 4:10:07 bike split in the process), it was also his fourth sub-8:30 iron-distance finish as well as a personal best time.

A new year and another personal best, this time second at Ironman New Zealand 2016 with a time of 8:09:37, made him the fourth fastest British athlete ever – before becoming the first British ‘Sub-8’ athlete at Challenge Roth 2016.

The latest additons to the list are, in his Ironman debut, Ritchie Nicholls and returning to Ironman after a couple of years of injury, Nichols Ward Munoz (both at Ironman Arizona 2013), while early 2014 has seen the addition of Daniel Halksworth and Harry Wiltshire at the Ironman Asia-Pacific Champs, Melbourne.

The biggest race of all, Kona, saw David McNamee become the fastest British athlete ever at the Ironman World Championships in 2016, for the first time in his career joining this ‘Sub 8:30’ listing. His second entry was a new Scottish Ironman record at IRONMAN South Africa 2017. And his third? Well, how about the first British Male Pro to ever finish on the podium in Hawaii, the fastest British athlete ever in Kona – and a new Scottish record! Some performance. 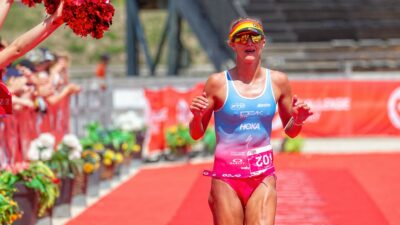 It's the 'new norm': Don and Dempsey say the bar 'has been raised' on the run 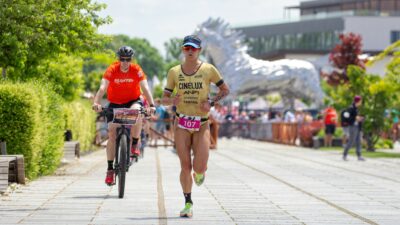 'I can't believe it!' - Sara Perez Sala reflects on career-best victory at The Championship

The Championship 2022 results: Gustav Iden back with a bang!