Since Always Aim High Events, organisers of the Cardiff Triathlon on Sunday announced a £10,000 prize purse for the their draft-legal Sprint distance Elite wave on Sunday, the entries have flowed in. Good prize money, domestic races in the UK are a rare find – so kudos to the athletes that have supported the initiative.

Headline name on the start list looks set to be Adam Bowden. Now based in Wales, he’s coming into the race off of a career-best fourth place at the Columbia Threadneedle World Triathlon Leeds. A dominant winner last year over the same format at the British Elite Championships at Tri Liverpool, he will start at the clear favourite.

“It’s really nice to have an Elite British race this year now in Cardiff. Looking forward too racing, nice to have a race right on your doorstep. Hopefully it attracts some decent crowds too.”

David Bishop knows Cardiff well, having raced and won two years ago. Fifth a couple of weeks back at the ETU European Cup in Weert, Belgium, he will relish being back at the venue of a race he has won before. 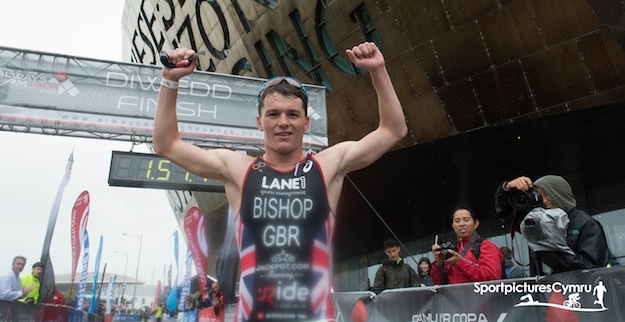 There are plenty of other potential podium finishers too – Chris Perham was a close second to Gordon Benson recently at the Blenheim Palace Triathlon. Look out too for the Roberts brothers, Fergus and Doug, Windsor Triathlon winner Thomas Davis, local athlete Iestyn Harrett, Alastair Rogers (Leeds Triathlon Centre) plus several others who would rightly see themselves as contenders.

However, Adam Bowden is the clear favourite to take the £2,000 first prize.

The Elite women’s race can boast an Olympian in the form of Beth Potter, who represented Team GB in the 10,000m at Rio. Very new to triathlon, Beth finished third at the Blenheim Palace Triathlon and will likely have to call upon her speedy running legs in the capital of Wales! She recently ran 32:04 on the track to win the British 10,000m Championships, so is more than capable in that regard…

The athlete that Beth passed in the finish straight at Blenheim was Hannah Kitchen. Hannah recently won a second ETU Aquathlon European Elite Championship and will be hoping not to hear the fast-approaching steps of Potter approaching from behind this week. Expect her to be at the front after the opening 750m swim.

“I’m really looking forward to racing in Cardiff this weekend, it’s great to see more domestic elite races being put on. It sounds like it’s going to be a fantastic weekend, a great prize purse is sure to attract some top names too. The course looks good – it’s exciting having a city centre race – with a swim in the bay and a technical bike course so I can’t wait to race again!”

I would also expect to see Zoe Thomas, Bronwen Owen and Fenella Langridge well and truly in the mix for podium contention.