You’ll likely have seen last month how triathlon/wetsuit brand, HUUB have teamed up with Wattbike in their Derby home to create the HUUB Wattbike Test Team.

I’m always fascinated to see these cross-sport collaborations, linking up in this case with the Derby-based cycling pioneers who have been taking on and beating the ‘establishment’ in the 4000m Team Pursuit. Part of that team of course includes Dan Bigham – himself a former age-group triathlete – who has found his Elite sporting home in cycling. As if to complete the loop, Dan is also a consultant to HUUB, developing products including their new Anemoi Aero Triathlon Suit. This may be track cycling – but there is a fair bit of triathlon DNA in the mix, too.

With the departure of one of their star riders, Harry Tanfield, to the World Tour, HUUB Wattbike have shown their commitment and desire to be the best – and have signed Individual Pursuit world record holder, Ashton Lambie, to the team for the Berlin (30th November) and London (14th December) rounds of the UCI Track Cycling World Cup.

Not many contract negotiations feature having to shave your moustache off as part of the discussions (even if it was said very much tongue in cheek). But the HUUB Wattbike test team isn’t really your conventional cycling team, and Ashton Lambie isn’t your conventional bike rider. The American is making the switch from Kansas to UK to link up with the Derby based squad. 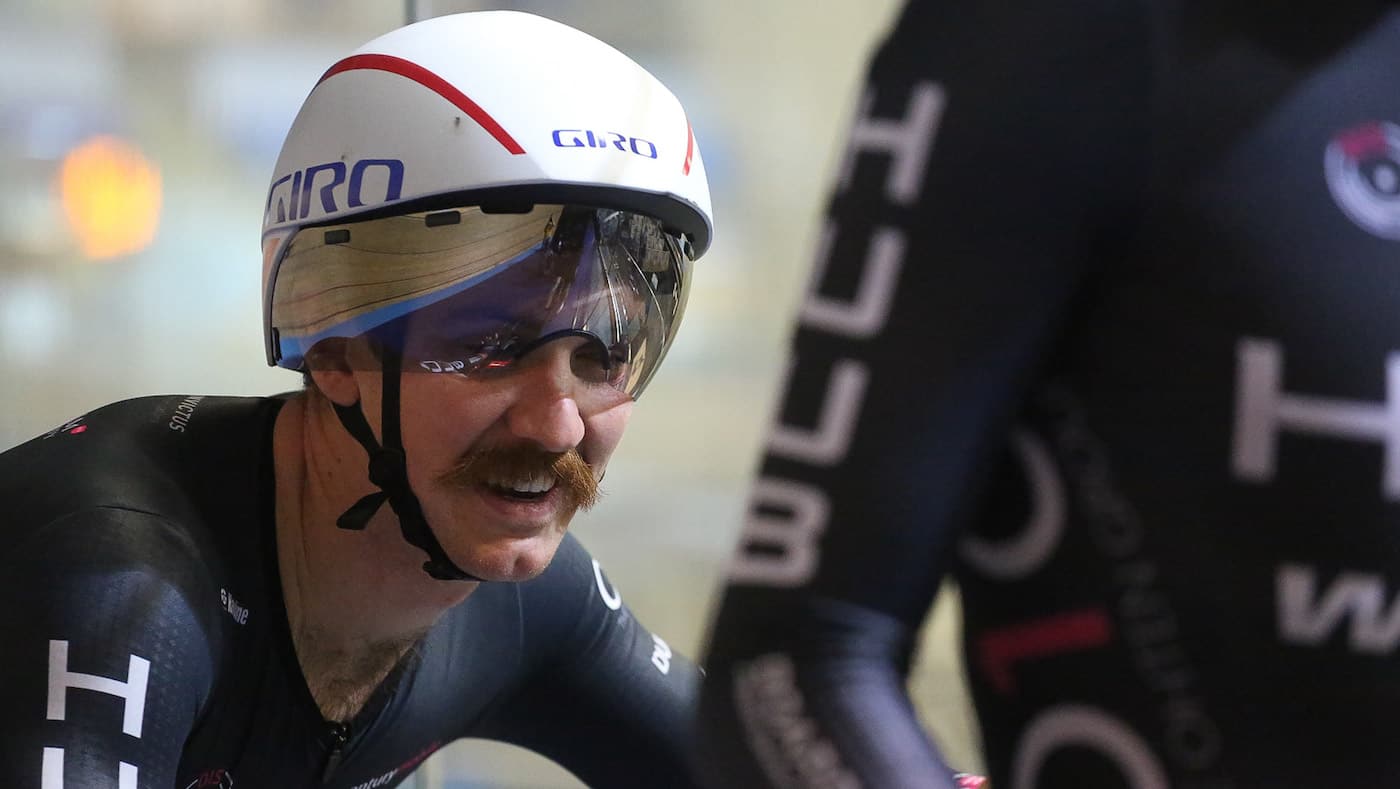 You’d be forgiven for thinking that the rise of professional cycling has brought fame, fortune and pampering to all the elite riders. However, it’s not all glitz and glamour. When asked what set the HUUB Wattbike Test team apart from the other national setups, the fact that they are still cooking their own dinners wasn’t quite the expected response. However, this highlighted just how much the team rely on being innovative and finding different ways to succeed without the access to unlimited resources.

They finished second in the team pursuit event at the most recent world cup event in Canada, beating the British cycling national team in the process. Their budgets don’t come close to those held by the big teams, so every detail needs to be thought about carefully. “We’re breaking the mould and doing it our own way. Our chain rings are made by a guy with arthritis in his shed, yet they are the best in the world”, said Team Principal Dan Bigham.

The difference between winning or losing in the Velodrome can come down to fractions of seconds. This is where marginal gains comes into play, with the team using specially designed skinsuits from HUUB: each one different and perfectly fitted to the rider. Dan confidently told us they were the ‘fastest skinsuits in the world’.

After the next race in Berlin, Harry Tanfield will be making the switch from the track to the road, having secured a ride with World Tour cycling team Katusha Alpecin. “Unfortunately after the Berlin World Cup, we’re letting him go so he can have his head kicked in riding up some big fat hills. Toby Tanfield was unavailable, so we had to decide how we were going to try and replace Harry. When the opportunity came along to draft in the 4km Individual Pursuit world record holder, Ashton Lambie, it was a hard one to turn down.”

With the 4km Individual Pursuit world record of 4:07, and a lightning 3:53 4km team pursuit to his name, Ashton is certainly no slouch. His route to track racing has been an unconventional one; originally a gravel rider from Kansas, he only transitioned to the track in 2017, but quickly made a name for himself with a seventh place in the individual pursuit at the 2018 Track Cycling World Championships. Just six months later he obliterated the world record at the Pan Am Games, knocking 3.3 seconds off the mark set by Jack Bobridge in 2011. 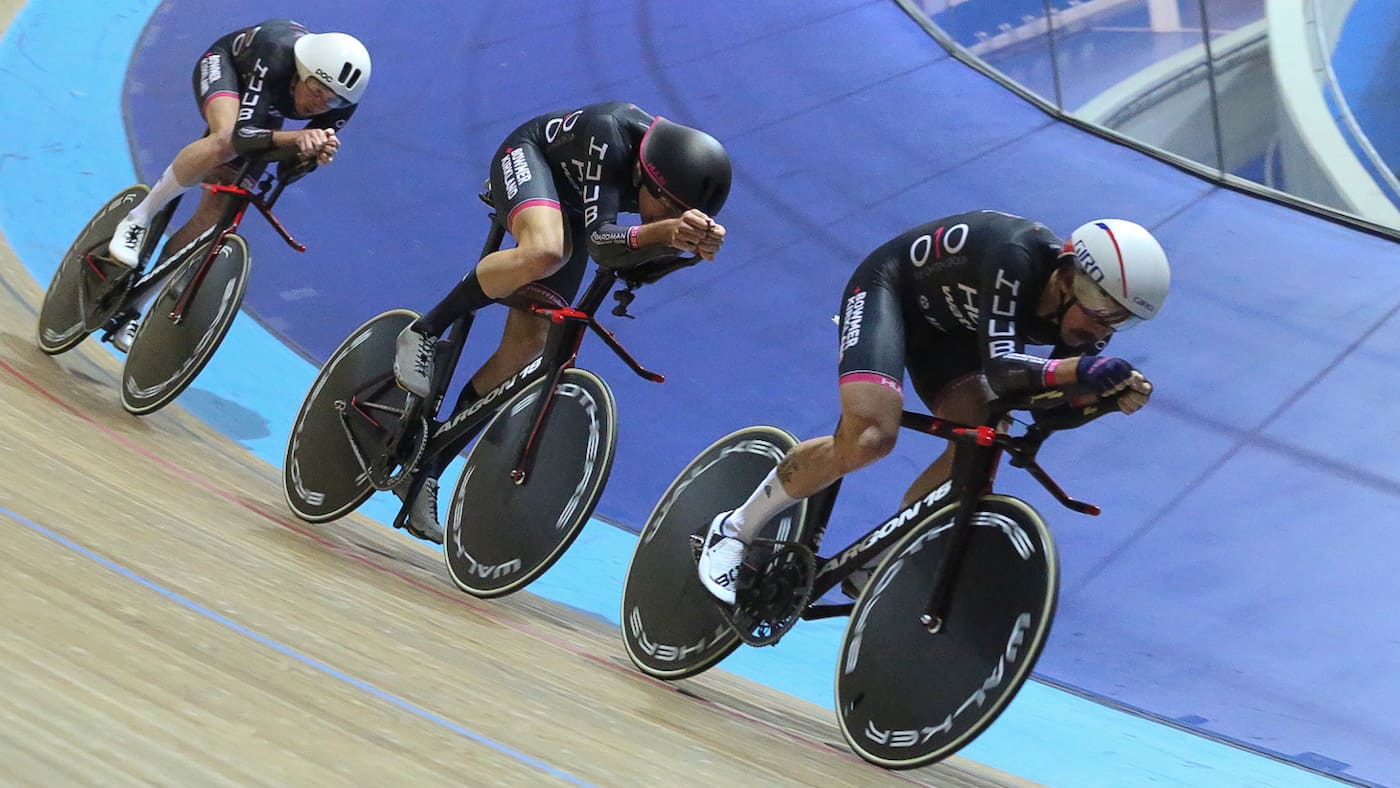 On joining the Huub Wattbike Test Team, Ashton said: “With an open December on USA Cycling’s schedule, I’m excited to join the Huub Wattbike Test Team for the next few months. Coming from a very different cycling background, I’ve always admired their unique approach to the Team Pursuit. I’m glad to have this opportunity and look forward to racing with them in Europe.”

Ashton will be stepping into the Team Pursuit squad for the next two rounds of the Tissot UCI Track Cycling World Cup, with the aim of adding some fire power in the hectic Berlin World Cup where the riders will have to execute three rides within five hours, before heading to London where the team are aiming to put on a great show in front of home crowds.

Speaking about Ashton, Dan said: “Securing him for this critical race block was quite a coup. He clearly has some mad gas; you can’t fluke a world record! I’m looking forward to seeing how much of an impact he can make on the team, and how we can best utilise his skillset. It will also be great to help his development as both an Individual and Team Pursuiter, applying our knowledge and techniques to get him dialled in.”

Ashton will now spend a week training with the squad at Derby Arena, before heading out to Berlin next week to race on Friday 30th November, returning for a further week in Derby and then taking on London World Cup at the Lee Valley Olympic Velodrome on Friday 14th December.