Coldwell arrived in Estonia in fantastic form, having recently won her first ITU Triathlon World Cup event in Tiszaujvaros, Hungary. Always one of the strongest swimmers in any race, Sophie headed out the non-wetsuit, 750m swim and a swift transition saw her first on to the bike.

Positive from the start on the bike, a breakaway group of four quickly formed with the Brit joined by Maya Kingma (NED), Anastasia Gorbunova (RUS) and Zsanett Bragmayer (HUN). With three of the four laps completed, the lead group held an 18 second lead over a large chasing group. Could they maintain that until the start of the 5km run, which featured a significant hill on each of the two laps? No! The chasers more than halved that deficit over the final deficit, leaving Coldwell to hit the run course in first position but with the rest of the field not too far behind.

Coldwell out of T2 in first place – the pack caught in the final stages of the bike so there's work to be done!

Chances gone? Absolutely not. Coldwell looked strong and simply ran away from the field and never looked threatened. With 2km to go even the commentators were asking, “Who’s going to be second?”.

Brilliant running from an athlete who just keeps getting better, year-on-year. Still just 23 years old, a fine example of what a decade of consistent training and dedication can achieve as I’ve been following her progress from the Tristar categories. Excellence takes a long time and Coldwell has been getting there in incremental steps for a decade now. 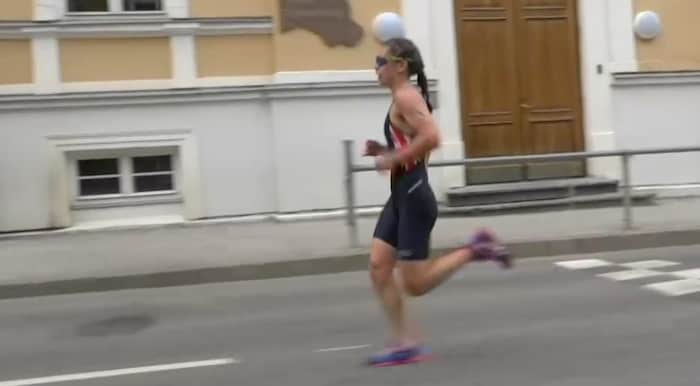 “I’m still an Under-23 athlete but to come here and take the title I’m really happy with that. Big thanks to all of the GB guys who were around the course and cheering. I hope you have a great race too!”

Estonia’s Kaidi Kivioja sent the home crowd wild by securing the Bronze medal, breaking away from the chase group of four – which included Great Britain’s Olivia Mathias – with Alexandra Razeranova (RUS) in the final 400m, with the Russian taking the Silver.