Nevis Triathlon #3: Around the island

With the 2018 edition of the event taking place tomorrow, we continue with this weeks travelogue by Tri247’s Paul Shanley of his experience at the 2014 Nevis Triathlon (www.triathlonnevis.com). Today’s update covers a tour of the island, drinking a Killer Bee and meeting some of the characters that live and work in Nevis.

Postcard from Nevis – Around the Island “arewe go”

Having got accustomed to the jungle noises quicker than I expected, I awoke early after a pleasant nights sleep and joined some of the other guests for breakfast. Being up early I took the opportunity to appreciate the Montpelier plantation in the daylight and it didn’t disappoint.

First activity of the day was a cycle around Nevis with Jane Hansom. Jane’s company, Sponge Marketing (www.spongemarketing.com) looks after PR for Nevis in the UK though I know her more for her triathlon than through work. Jane races a lot – and when I say a lot I mean a LOT – and add to that she is very talented, I am sure you would have seen her at races (and on the podium) throughout the year. Although I feel that I know Jane from watching her race and the passing hello, this was the first time I got to spend some time with her and we had a lot of fun. 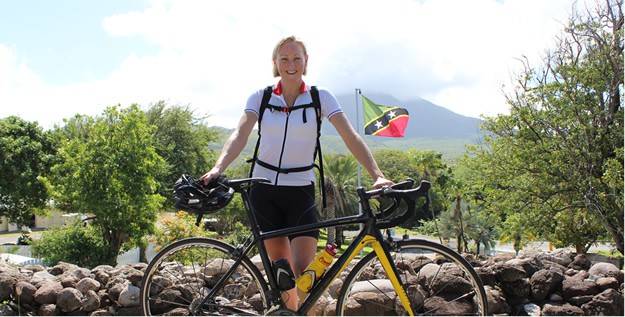 Heading out on the island’s main road the first thing I noticed is how little traffic there was and what little there was on the road seemed very alert and accommodating to bikes. The roads themselves are not perfect by any standards but are fine to cycle on and far from flat and boring. In fact you can get out for a tough cycle if that is what you are after or a relaxed ride to take in some of the sights.

As you can imagine the road around the island is mostly picturesque with jungle either side and regular parts running along side the sea. Dotted around the island are lots of the original wooden houses painted in various candy colours and its amazing to think that some of these buildings have survived numerous hurricanes (especially when some of the more modern ones have suffered). The plan for the cycle was to do a full circle of the island with regular stops on route to take in some of the sights. For a small island there is lots to see and with Mount Nevis being in the centre and the road a ring around it its pretty easy to navigate without getting lost.

On route and all of the locals say hello and give you a wave and having been on the island for less than 24 hours, I was already liking the feeling of familiarity. Like the majority of the Caribbean islands, religion is an important part of island life and there are churches of all different sizes around the island. The different towns are based in parishes named after saints (St Thomas, St Paul, St James Windward and St Georges).

It seemed appropriate that one of the first stops on route was to one of the most significant churches not only on the island but in the caribbean; Cottle Church. The church was built by John Cottle in 1824 as a place for his family and his slaves to worship together, something that was illegal at the time. The church is in ruins now although still used regularly for weddings and there is something very magical about it.

One place I did want to see on the bike journey was Nevis Drag Racing strip, St James Raceway. Sitting just off the main road, the spectators sit slightly up on a hill looking down on the strip with the ocean in the back ground. The main gate was a low key affair with a small building which I assume looked after ticket sales. There were no cars to be seen today just some goats and sheep keeping the spectator areas nicely cut back. It must be hard to find a better looking drag strip or one in a more unusual place.

I was told that a few years ago there was a bad crash on the island caused by teenagers racing each other. To address the problem and to give the youngsters something to do the goverment looked to put in a drag strip and hence St James Raceway was created. As well as local racing, drag racers from all over the caribbean bring their cars along to compete and you can watch some races HERE. 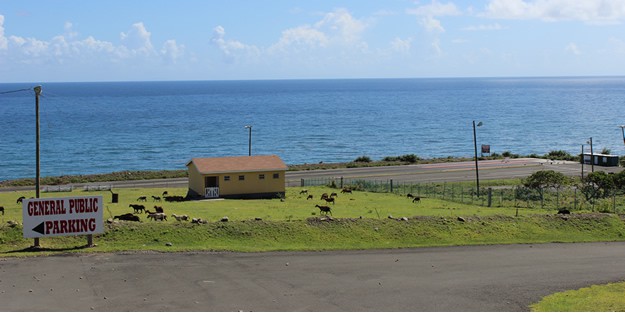 Heading into the capital Charlestown, there was a bit more hussle and bussle than the rest of the island but you would be hard pushed to describe it as busy. The town has remained very traditional and still get to see lots of the 18th and 19th century Georgian-style buildings.

One of these buildings is the birthplace of Alexander Hamilton in 1757 who lived on the island to the age of 9 and later on in life went on to draft the U.S Constitution and was the first secretary of the Treasury. Hamilton House now houses a museum detailing some of Nevis history and as you can imagine is a popular destination for a lot of the American visitors to the island.

Just on the outskirts of Charlestown is the Natural Springs – a natural volcanic spring coming out of the earth at around 41°c. The spring is far from a flash affair and you could easily miss it had I not be told exactly where to find it. When you arrive you are greeted by a small tiled pool sitting underneath a simple wooden roof and it was actually nice to see that it hasn’t been commercialised and was free to use and for everyone to enjoy. Thermal energy is something Nevis is looking to capitalise on and plans are afoot to not only provide power for Nevis from this energy but also to supply some of the neighbouring islands.

While out on the bikes we got a call to see if we would like to meet Nevis’ most famous cricketer Elquemedo Willet and although not triathlon related, the opportunity to meet great sports people is something I never turn down. Elquemedo was the first man from Leeward Islands to play for the West Indies which at the time which significant not only for Nevis but all the islands in the Caribbean. To give you some idea on the impact he had, we were going to meet him at the stadium named after him in Charlestown. Elquemedo now teaches sport and was about to watch his team of youngsters play a game of football and was kind enough to chat to us before the game. 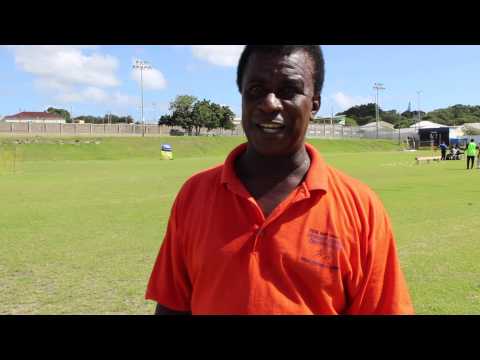 Following on from our chat the next stop was to meet another significant local – Sunshine. Sunshine owns a bar/restaurant on the beach called (wait for it….) Sunshines (www.sunshinesnevis.com)!

The vibe in the bar was very Caribbean and the list of guests that have experienced Sunshines hospitality reads more like the guest list for the Oscars. As well as being popular with the world’s top celebrities you will also find plenty of locals enjoying the food and drink. The signature drink is Sunshines Killer Bee, a mix of rum and other ingredients (all secret I might add), and very pleasant too. I assume the killer bit is they don’t feel they are that strong but I can tell you they do pack a punch. We had a chat in the Sunshine at Sunshines with sunshine: 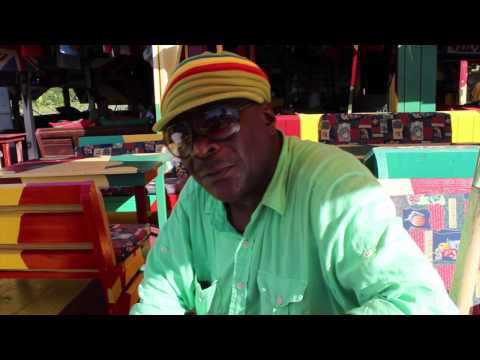 After just the one Killer Bee we got back on the bikes (anymore and I suspect that wouldn’t be possible…), and headed along the road to Oualie Beach, the location for the start and finish of the triathlon. Race director Winston Crooke was at his workshop getting ready to put on another event on the island of St Kitts so we took the opportunity to chat to him and find out how Nevis got its triathlon, a triathlon club and why he is wearing a British Triathlon cap: 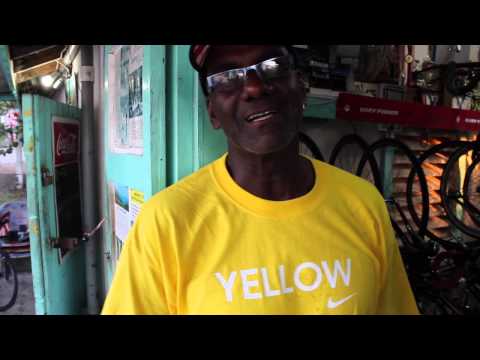 The beach at Oualie is a real focal point for sport on the island and we also caught up with John Yearwood manager of Oualie resort to find out more. John has lived on Nevis all his life and has created a wonderful environment at Oualie which is just as beautiful as some of the top hotels on the island but with the intention of making it more affordable. The resort was recently named the second best beach resort for under $200 worldwide by Islands Magazine. We could have chatted to John all evening and you can see from the video we did try, so sit back with a glass of two of wine and listen to John talk pirates, fishing, being expelled from school and the new blues festival: 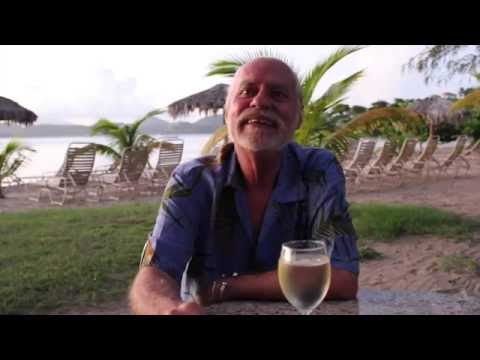 As well as hosting the triathlon on the beach, the Nevis to St Kitts swim and the annual fishing competiton, John is working on a project to bring a blues festival to the island which looks like it will be fun you can find out more about this family-owned and operated business here (www.oualiebeach.com). For details on the Fishing Tournement in October visit (www.nevisyachtclub.com). You can get details of the new blues festival via (www.nevisbluesfestival.com).

By the time we had finished chatting with John (after a few more rums…), cycling back to the hotel was not really an option so I caught up with Bernel my driver from earlier and he kindly put the bikes in the back and we headed back to the hotel. Bernel was a lovely guy and I enjoyed our drives around the island pointing out different areas of interest and also explaining some of the local dialect. Locals can talk very quick and it is difficult to follow (even though they are talking in English), and after a couple of attempts these are a couple of my favourite sayings:

arewe go – Let’s all go
come yah – come here
gawn to come back – will return soon
Lime – relax (this was my favourite as I wanted to do more limin).

After a quick turn around in the hotel and a brief appearance at the daily Montpelier cocktail get together, I was back in the van with Bernel and heading to the Nisbet plantation for dinner. The Nisbet plantation (www.nisbetplantation.com) is situated right on the beach and is the former home of Frances (Fanny) Nisbet who married Horatio Nelson. The hotel is a popular destination for weddings and after each wedding the bride and groom have a tree planted for them which is a lovely idea and something to go back to see in the future.

We were having dinner in the hotel’s restaurant on the beach with its own swimming pool and bar. Dinner was a BBQ and featured lots of seafood, and with a local band playing plus plenty of rum punch, it was a lovely wind down to what was a busy day. 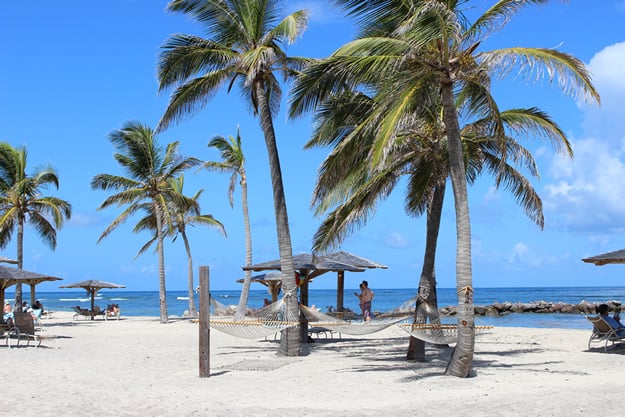