With the 2018 edition taking place this week, part two of our own visit four years ago to the Caribbean for the Nevis Triathlon. Island hopping and hotels are on the menu today…

With the 2018 Nevis Triathlon (www.triathlonnevis.com) taking place on Saturday, we continue with part two of our look back to our own Caribbean trip when Tri247’s Paul Shanley got the full Caribbean experience in 2014.

Far more than just a race, the Nevis Triathlon was a true experience and this series of updates culminating in race day, is essential reading. Beware, you’ll likely get very jealous…

We landed in St Kitts around 5.30pm local time (Nevis is four hours behind the UK), and the sun was just starting to set. The plane did stop off in Antigua for about 40 minutes to drop off some passengers before taking off again and flying over to the island of St Kitts. St Kitts is the bigger of the two islands that makes up the federation of St Kitts and Nevis, and is where the main ariport is based. As I mentioned before Nevis does have its own airport, but it can only accomodate small aircraft and private planes.

From St Kitts airport it was a relatively short taxi ride down to the coast to catch the ferrry across approx 3km of water to Nevis. With the stop off in Antigua and then all this island hopping, the trip was already starting to feel like a real adventure and this was added too when the taxi pulled into the ferry terminal which consisted of a beach with a precarious wooden jetty sticking out. Even in the low light you could just make out the island of Nevis in the distance and Nevis Peak sitting nearly in the centre of the island.

There is a vehicle ferry that goes across to Nevis which you get at a different terminal, but the ferry for us was actually a modern(ish) fishing boat, with fishing equipment very much in place. It was climbing on the boat that I realised that we were heading for somewhere off the beaten track and my comfort zone of ticket machines, allocated seating and safety instructions were a couple of thousand miles away in London.

With a couple of guys to take the bags and pile them up in the bow of the boat and not so much to hang on to, the boat set off into the night. Now I know this in not Raiders of the Lost Ark – and I am no certainly no Harrison Ford – but the feeling of freedom and adventure I felt as the boat bounced over the waves towards Nevis in the now pitch dark was immense. The Nevis Tourism Board goes with the slogan Nevis Naturally and after my initial wobble caused by being out of my comfort zone, I found I naturally adjusted to my surroundings. There was no tickets because the guys knew who we were, no allocated seating as plenty of places to sit, and no need to tell you to hang on because as soon as we started you did!

You can – and I have done – triathlons where you fly in, jump in a taxi and its short drive to a nice hotel but let me tell you, it feels much more exciting to be hanging on to a boat charging its way towards a small light in the distance with little of idea of what is there.

On the boat I got to chat to Tim Lloyd race director of Always Aim High Events along with Ewan Brown and Suzie Richards, the male and female winners of his three “S races”: The Slateman, Sandman and Snowman. Winning all three of the series got them a trip to race the Nevis Triathlon and having watched the race highlights on Channel 4, that was no easy task and both were well deservied holiday winners. Tim had taken the opportunity to get away with his partner and experience Nevis himself and it was great to be able to spend some time with an organiser who is making a difference in the sport. Tim was telling me about how he is trying to improve his current races as well as adding new ones, including the Cardiff Triathlon.

Mooring at Nevis ferry terminal (another wooden pontoon), and unloading our bags onto Oualie beach the first person I met with was the triathlon race director Winston Crooke who couldn’t have been more welcoming. Winston is a tall and athletic looking guy and I guessed he was the race director because as well as looking sporting he was wearing a British Triathlon cap. I took the opportunity to get myself a bike for a planned bike ride around the island in the morning and got to have a look at Winston’s bike hire business.

Having originally set up on the beach to offer windsurfing lessons/board hire, Winston quickly moved into cycle hire after the number of requests to hire bikes went up. Winston knows his stuff and I left with a fairly new Trek 2000 which was in good condition and properly set up and would be perfect for the race on Saturday.

The group I was with were all staying in different hotels and I was going to be on my own, staying away from the beach at the Montpelier Plantation (www.montpeliernevis.com). Having had a quick look online back in the UK at the different places to stay, the Montpelier Plantation & Beach would have been at the top of my list. A former sugar plantation dating back 300 years it is actually the place that Lord Nelson married Francis ‘Fanny’ Nisbet and with only 18 rooms available and set out of the way, I just knew it was going to be special. Although located away from the beach the hotel does have its own private beach (a complementary bus journey away), and the seclusion it offers is probably one of the reasons that Princess Diana came to stay here just after her break up with Prince Charles. 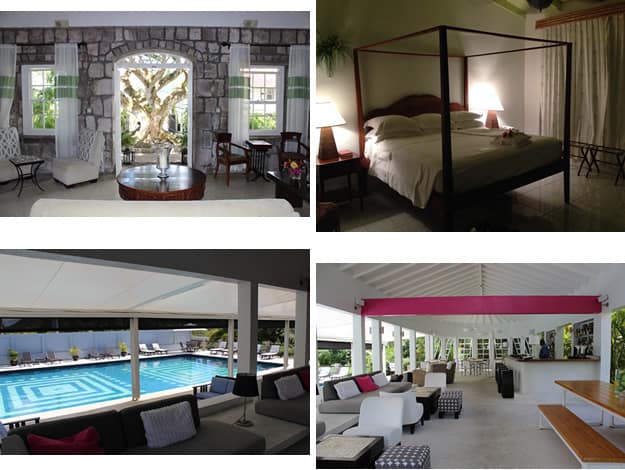 There is one road that circles all the way around the island (about 21 miles in distance), and I was taken up to my hotel by taxi driver Bernel Smithen and Julie Claxton from the Nevis Tourism Authority. Both Bernel and Julie were lots of fun and even in the dark took the time to point out items of interest on the journey up and generally provide some great company. I didn’t get to see any monkeys but we did have to slow down for a number of donkeys wandering in the road.

Upon arrival at the Montpelier I was treated to a warm welcome and the house and gardens looked stunning lit by moonlight, spotlight and candle light. Driving down the dark road and then approaching the entrance to the plantation with a large twisted tree outside the front of the main house, the place looked amazing. Bernel was quick to ask me how old I thought the tree was outside the main house which I guessed was hundreds of years old but turns out it was actually planted in the 1960’s and the guy who planted it still worked at Montpeiler. Once checked in and shown to my room I had a quick change and then met the current managers of the hotel for dinner.

The owner, Muffin Hoffman, was away on holiday which was a shame as I did want to meet her. Muffin bought the hotel with her late husband in 2002 and at 72 is up early every morning to swim a couple of kilometres in the swimming pool before opening up Montpelier and looking after the guests. Everyone at the hotel was friendly and welcoming and I particularly liked that every evening at 7pm, hotel guests, the staff and the family meet for cocktails in the Great Room.

With only 18 rooms I was surprised to find that the hotel has three restaurants and given the option on which one to dine in I went for the outside bar overlooking the floodlit swimming pool and the 300 year old Sugar Mill. They do say good food goes well with great company and I was joined by the current managers Jesus and his wife who were both great company and the food was devine. Originating from Spain and having worked for sport holiday venues, we spent the evening talking sport, triathlon and of course Javier Gomez. Jesus was tempted to do the triathlon but alas work commitments ruled him out this year but I am sure he will be racing next year.

Walking back to my room the noise from the evening wildlife was immense and adding to the feeling of adventure it did feel like I would be staying in the middle of the jungle. 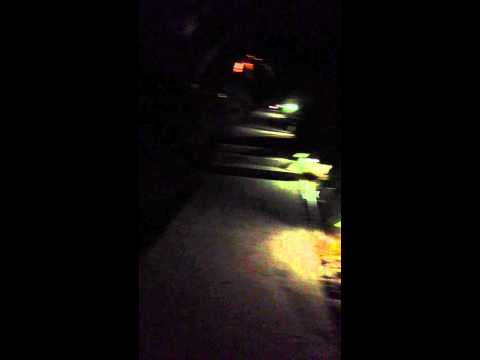