What’s on this weekend? The preview…

Still relatively quiet on the early season racing front, here’s a look at what’s on this weekend.

After last week’s crash-impacted ITU World Triathlon Abu Dhabi (catch up on that here: Women | Men), athletes will be hoping for dry and safe conditions this weekend at the ITU World Cup event in Mooloolaba, Australia on Saturday.

While we did float the idea (and he was initially listed), that Alistair Brownlee was a potential starter here, given his DNS with injury for Abu Dhabi, the two-time Olympic Champion will NOT be racing this weekend. The British entrants listed are Grant Sheldon, Iestyn Harrett and Joshua Lewis, with Scotland’s Commonwealth Games bound, Beth Potter in the women’s event.

A winner at the end of 2017 of the ETU Triathlon European Cup race in Funchal, Portugal, this will be her first step up to World Cup level (and indeed, only her third international ETU / ITU race of any status).

Race #1 for the men is Richard Murray (RSA), who will be hoping for a different result to his day in Abu Dhabi last week. A regular winner of early season World Cup events, he’ll believe that his finishing position can match his race number…

Crashed today on the course , which was dangerous to tell the least . 10th after a good bike and run 🏃🏻 , I’ll take that . Thanks for support guys , on to Mooloolaba we go . Pity I felt great. 👌 pic.twitter.com/7ZEHSJFqUl

Last year’s Mooloolaba event saw only 16 Pro women start, with Emma Jackson and Ashleigh Gentle taking the top two spots over the, at the time, Standard distance race. 34 athletes listed this year, with #1 worn by Kirsten Kasper (USA), who finished a frustrating fourth in Abu Dhabi.

A lot of mixed emotions @ #WTSAbuDhabi Served a penalty for which I was wrongly accused. I protested post race and it was overturned. Unfortunately, it doesn’t change the result or get the 10sec back. Frustrating way to place 4th. Congrats n great race 2 the podium ladies! pic.twitter.com/7K5pkMUdzE

Yes, I had to look up where it was too… Bariloche is in Patagonia, Argentina! A brand new race with $25,000 in prize money on offer for Pro athletes. Terenzo Bozzone (NZL) is listed as for this one which, given his fantastic win at IRONMAN New Zealand on Saturday, you would assume makes his presence unlikely. But, this is Terenzo… and he is one of the absolute best at back-to-back racing! Full start list is HERE.

Sunday’s Bedford Aerodrome Duathlon from NiceTri events includes GB Age-Group qualification for both the 2018 and 2019 ITU World Championships over the Sprint Distance, so expect fast racing over the draft-legal 5km / 20km / 2.5km format. The British Duathlon Championship will be back at the same venue in two weeks time.

Monster Racing will host their Monster Duathlon at Witchford Village College, Ely on Sunday – start list for that one is HERE, while the swim-run fans have the latest round of the Tewkesbury Tri Club Aquathlon Series. More duathlon – this time for women only – with the Roding Valley Tri Club event at the Velopark in the Olympic Park, plus the UK Fire Fighters 2UP Duathlon in Bolton.

If you were thinking of doing the Aboyne Duathlon you can have a lie-in – because of all the frozen snow still round the course it has been re-scheduled for April 29th.

No racing in the Russian capital this weekend that we are aware of, but it will be hosting the annual European Triathlon Union President’s Conference and Gala Dinner. This includes the ETU Awards for the 2017 season, and your Editor will be present as MC / host of the Gala Dinner, which follows previous events in Rome (2017) and Paris (2016). Jessica Learmonth would appear to be a very strong favourite to win the Female Athlete of the Year award, while Sarah Taylor-Hough is on the shortlist for Technical Official of the Year.

Time to dust off that suit again then! 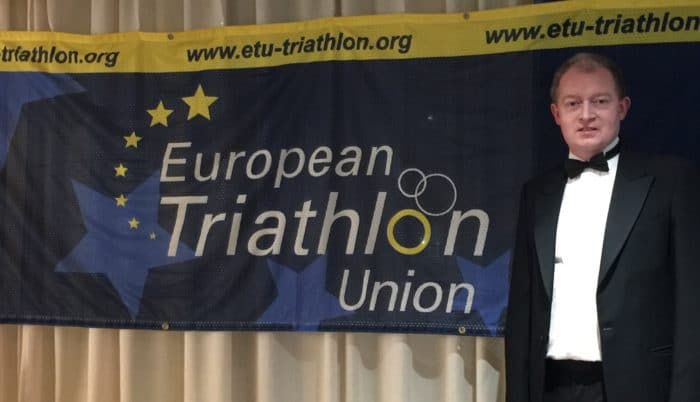