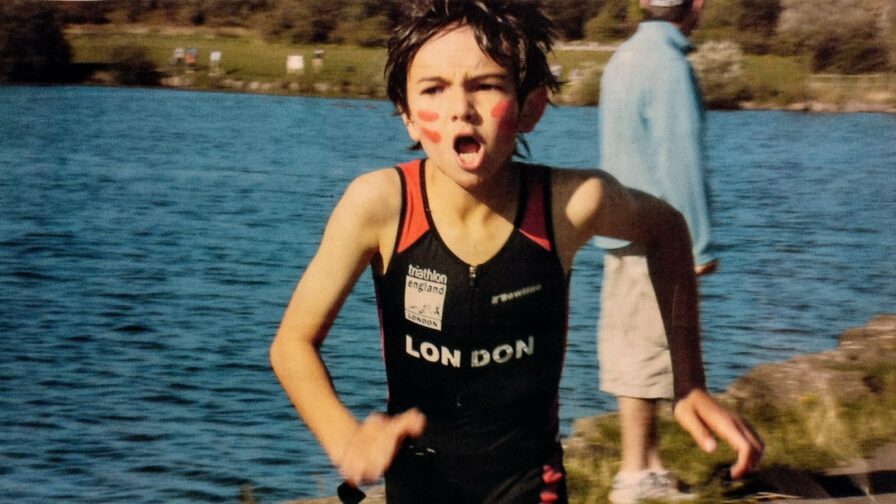 In part two of his exclusive interview with TRI247, Great Britain Olympic contender Alex Yee looks back at his early years in the sport, and the key moments on a long journey which has taken him to Tokyo 2020.

You know you’ve been around a while (i.e. you are old…!) when you have followed almost the entire career of an athlete. There are several British elite triathletes that can apply to, but in the case of Alex Yee, it is particularly the case for me.

Some of his earliest events were those hosted by my own triathlon club, Hillingdon Triathletes, well over 10 years ago now. At the time, Alex was a young (and very small) athlete, one of a group that would regularly take part in our Children’s Duathlon events at Hillingdon Cycle Circuit, visiting from Crystal Palace Triathletes.

Given his abilities now, it would easy to assume that Alex Yee was a child prodigy, destined for the stars from the moment he laced up his first pair of trainers. He did start young… but that is far from the truth. We can however thank Dad (Ron), for bringing the sport to his attention in the first place, an interest which would ultimately lead him towards selection for Tokyo 2020, following his breakthrough performance in Leeds.

“My Dad did a bit of duathlon before I even started doing triathlon, and so I remember when I was about six or seven years old, going to watch him doing duathlons domestically, and I’m sure I came to Hillingdon with him before I actually raced there.

“When I was about nine years old there was the first ever Crystal Palace Triathletes junior session and my Dad took me down there and I met Jon Horsman (Crystal Palace Head Coach) and a few other people. I really enjoyed it and that’s really where it all started for me.

“I think Hillingdon was maybe my second ever multisport race, I did one of the Crystal Palace events they have at the venue and that was one of my first races.”

“I remember the hill being really steep at the time – but I bet it probably isn’t steep at all, if I was to ride up it now!”

While Olympic medals, World Triathlon ranking points and prize money are just some of the rewards sought as a professional athlete, Alex still looks back fondly on the (sweet!) incentives which used to be in place a decade ago.

“We used to get our chocolates [Ed – they were the prizes, often a selection box or an Easter egg, depending on the time of the season the race was held!]. I remember everyone would share around their chocolates, whether they got a podium or not, and everyone would go away with something which was quite cool. Good times!”

Now based in Loughborough and often racing and training abroad, Alex has limited opportunities now to return back to his South London family home, but is very grateful of the warm welcome he receives when he does get back to the clubs which helped mould him into the athlete he is today.

“When I do go back home – which is not often now – it’s great that I can still go back to Crystal Palace Tri, do a swim with them and be welcomed in or go for run with the Kent A.C. boys, even though it has been so long because of COVID. I’m definitely looking forward to going back where it all began, and going full circle.”

While solid coaching from a young age, guided by those experienced in looking after young athletes provided strong foundations, Alex also acknowledges that sometimes good fortune can help you progress too.

“I feel that I was lucky and had a lot of fortunate circumstances that allowed me to progress in sport. Kent A.C. and the running track was only 2km away, so it meant that I could run there and wasn’t at the liberty of my parents to take me.

“I just turned up one day, and having Kent as a running base when I was 13/14 years old is definitely one of the reasons that I’ve progressed in running so much.”

A turning point for Alex Yee

I was interested to know how Alex went from young athlete enjoying the social aspects of his club environments, to wanting more and realising that he did have the talent and desire to achieve. Sometimes tasting defeat is a good thing.

“There were definitely moments for me where I remember not being satisfied, wanting more from myself. Particularly the [British Triathlon] Performance Assessments where I actually got lapped out of the race. I remember just wanting so much more from myself… and almost those moments where I had disappointments, made me realise I wanted to chase and pursue this.

“I think 2015 was the year that I got lapped out and I remember really being disappointed with myself, wanting more and it gave me the motivation and drive. I remember sitting down with Jon (Horsman, Crystal Palace coach) and saying that I didn’t want that to happen again. I remember we got up early before school, went and did some chain-gang rides… those little things make a difference, and I guess those times have been the changing points in how I wanted to move forward with the sport.

“A few months later I came second at the first European Junior Cup I ever did and after having such a disappointment, it did show that the hard work paid off. I think for me that’s a massive thing – when I’ve put in that work, I’ve got the reward for it and that’s one of the great things about our sport. I’ve now put so much effort into my swim and I am starting to reap the benefits of it.

“I love the process of progressing – it’s very hard to be a perfect athlete, there’s always something to work on. The sport is evolving so much, there are so many talented people that it keeps you on your toes and maintains the excitement of it for me.”

Having watched Alex’s career develop over the past decade, from those early duathlon events at Hillingdon Cycle Circuit, I’ve always been impressed by the perspective he maintains. Level-headed, he’s always seemingly accepted defeats and disappointments with good grace, while never letting success go to his head either. I was interested to know where that composure in a young athlete comes from.

“I definitely think I’m more driven by the process than the outcome of a race. For me, Euro Cross in 2016 [Ed. where Alex fell / was tripped, at which time I remarked, “He’s a talented kid with the right attitude and his feet firmly on the ground. Keep up the good work.”] was extremely disappointing at the time, because I was massively there for an outcome.

“I think that was one of the turning points where I started to focus more on the process side of things, because in that race, realistically, I probably ran really well for myself. It was something out of my control, and that’s going to happen – especially in triathlon. For me it’s been the best move to start the race in the optimal psychological state to focus on the process.

“Outcomes are extremely rewarding, but there’s always things you can draw on and learn from. Certainly at the age I am now, I still think I’m learning, a child of the sport and hopefully and as long as I’m learning something from each race then I’m progressing as a sports person.”

As well as finding his own way, that mental switch from outcome to process, Alex also credits the influence of his parents on his mental approach.

“I think that comes from my parents’ support – there was never any difference being picked up from a really good race or a bad one, they loved me just as much. That’s a great thing, I could step away from the sport and be loved just as much, and that’s a massive perspective to remember as a junior athlete.

“At the end of the day, a lot of the stuff you do is for you and how happy and proud you make yourself – but your parents will be proud whatever you do, as long as you give your all.”

Perhaps the biggest hurdle to overcome so far, is one that could well have ended up with even more serious consequences.

Racing at the ITU Triathlon World Cup in Cagliari, Italy in 2017, Yee was involved in a horrific bike crash. Broken ribs, vertebrae and a collapsed lung could have been so much worse. It’s an incident I saw once – and I never, ever want to see it again – an impact which saw a concrete bollard sent down the road like a skittle, such was the severity of the impact. How did he bounce back from this?

“One of the things I’ve taken from that is perspective. I was and am extremely fortunate to be in the position I am now. Everything I do is a blessing really considering I was probably inches away from something a lot worse.

“I think also, stepping away from the sport – I was doing my A-Levels at the time – a crash like that makes you realise that while sport is important, your health is everything and a lot of people are realising that with the pandemic at the moment. Living is what’s important, so perspective helps me be grateful to be on the start line and to be training.

“Even just having the change to do something different – the rehab etc, I think it made me a lot stronger, progress in S&C, and actually come out the other side as a better athlete. That’s a massive credit to the support around me – Liv, my girlfriend, my Mum & Dad, and the British Triathlon support team were absolutely brilliant. I am really lucky.”

There are not many people who would regard the Cagliari experience and the impacts of it as lucky, but Alex’s progression from it over the last four years to the present day have been truly impressive to witness.

You can read the third and final part of our interview with Alex next week, as our countdown to Tokyo 2020 continues