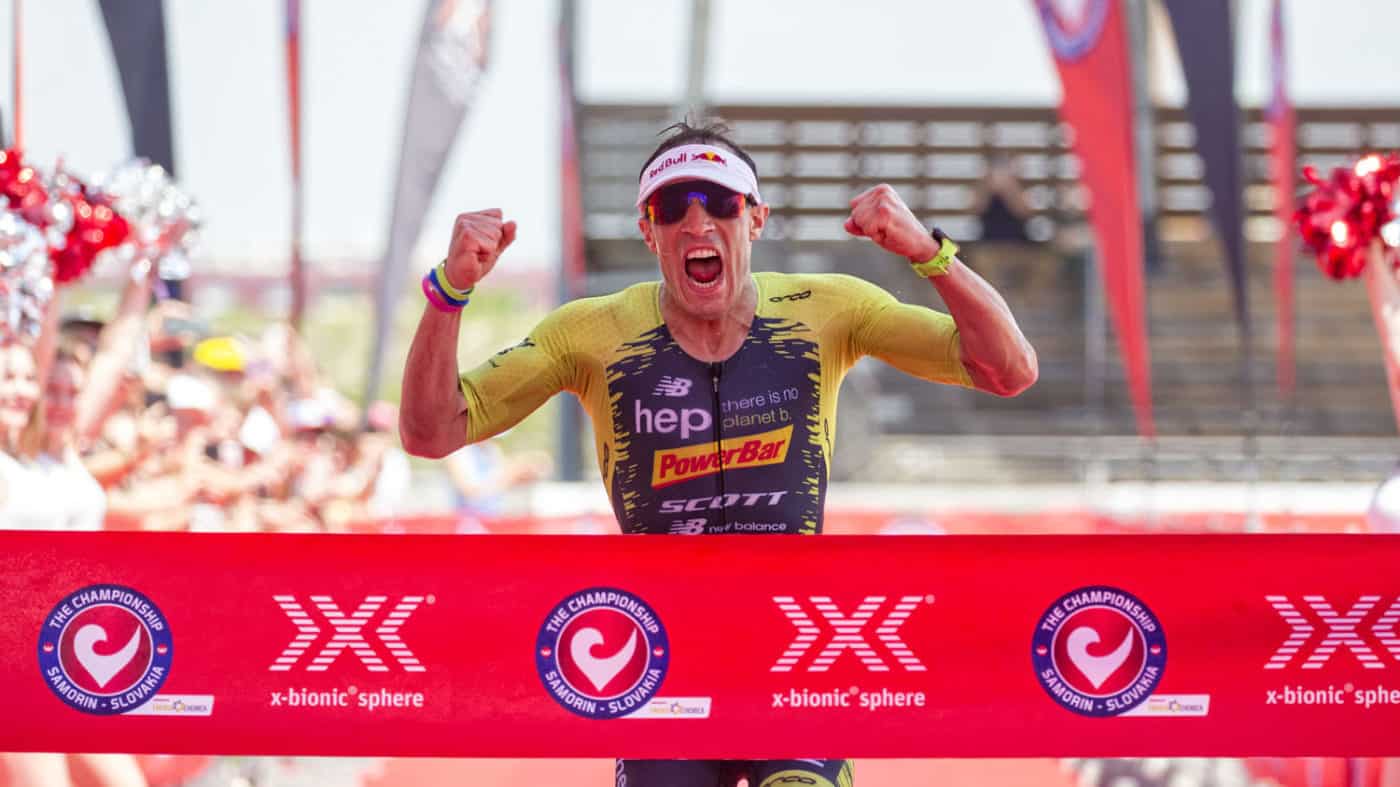 With victories at all of the ‘monuments’ of middle and long distance triathlon, Germany’s Sebastian Kienle is one of the greatest athletes of his generations.

As well as a fine athlete, he’s always an absolute joy to talk to,, with great insight and perspective on not just his performances, but the status of the sport as a whole.

I sat down with Sebi on Thursday, ahead of Saturday’s inaugural Collins Cup, where he has been matched with Lionel Sanders and Andrew Starykowicz. That is a trio of athletes who have pushed each other to some of their career best performances over the years.

In particular, Lionel and Sebastian produced two memorable battles here at the x-Bionic sphere, at The Championship in 2017 and 2018, something not lost on the German.

“Yes, here in Samorin where I’ve already lost two races against Lionel, so I’m definitely really motivated to finally beat him here on that ground”

While Sebastian came out second best in those two epic battles, they are experiences that will live long in the memories of both athletes, plus everyone who tuned in to watch. If you wanted spectacle, they provided it.

“You are absolutely right, the biggest thing for me is to deliver a great performance to showcase our sport. I think that’s why it’s a great match-up for me personally, but also for the Collins Cup.

“I have the same feeling – while they are two races I lost, they will stick in my mind and I will always remember, that’s what it’s about. That’s the reason why we are here – to create memories for the athletes, but also to put triathlon on the map when it comes to TV.”

More than a show – this is real

While the PTO are investing a huge amount of effort, energy and finances into making the Collins Cup a show, Sebastian is clear that there is real substance behind the presentation.

Inspiration from the Olympics

Three weeks after the incredible success of the Mixed Team Relay at the Olympic Games in Tokyo, the appetite for ‘team’ sport and the debut of the Collins Cup, could be perfect timing. I regard that Mixed Relay as one of the greatest triathlon events I have ever seen – something we both agreed on.

“I 100% agree. I’ve watched the race on my trainer, and I’ve stopped pedalling because I was concentrating so much on the race. I think that’s great.

“Also for me, I don’t have another 10 years in the sport, but there will be a next generation and the generation after that deserve races like this. We also want to attract young people to the sport – it’s a great sport, a very healthy sport – and even if you don’t make it to the Olympics, for me, the sport changed my life in so many ways.

“During the pandemic, I realised it’s not just about the races, trophies and winning races… it’s therapy. If the world arout you is f&^*ed up, you just go into the forest and run for an hour. It’s relief, you don’t need any pills. That’s what we want to put on, and attract people to the sport.”

The next generation are here

One the elder statesman of the sport, the Collins Cup is showing evidence of the next set of stars, the likes of Gustav Iden, Kyle Smith, Daniel Baekkegard, Sam Long all racing. Add in others like George Goodwin and Frederic Funk, and the Sebastian thinks the future is bright.

“They will make us retire, at least that’s how I feel about it.

“For me, my sporting career as a professional will be over at the point when I don’t have a chance any more to perform at that level. You can already see that – you’ve mentioned a couple of the guys – that’s how the nature of the sport is, there’s nothing to be sorry about it, I will fight with everything I have to move that point in time a little bit backwards, but there’s no question that this is coming and there’salso no question that the next generation of athletes, especially in triathlon, are better, faster, stronger than the next generation. That is the nature of our sport, it’s still a young sport.

“Does it mean the past generation has been less quality? No. It means that the next generation have learned from what we’ve learned and therefore we are also paving the path for them, and it is greatly appreciated that there is some talent coming up.”

Europe to win – but expect the unexpected

When all is said and done, will it be Team Europe lifting the (very heavy and large), Collins Cup?

“Yes – you should not bet against that. On paper we are by far the strongest team, but a lot of things can always happen.

“Some of the match-ups are I think a lot closer than they look from the outside, a lot of question marks. Even if Team Europe is a heavy favourite in this one, there is so much more going on. Every single race is interesting, and you also have the times from every single heat. You can compare your times against the others. You never really have that, a race that is so clean that there are really no tactics involved.

“There’s a lot of skin in the game, even among Team Europe, I mean Patrik and Jan are my closest rivals and so I want to see how I match up against them later on when it comes to times. There’s a lot of layers of excitement.”