Ahead of the 2019 edition of IRONMAN 70.3 Bahrain, the IRONMAN 70.3 Middle East Championship, here is the second part of our re-published and updated ‘70.3 Bahrain experience’ from the our visit to the event in 2017.

This piece centres on our experience of race itself.

Having covered the travel, accommodation and logistics of getting to IRONMAN 70.3 Bahrain in Part One, lets take a look at the race experience that awaits when you get there.

First up, unlike Challenge Bahrain in 2014 (when I did the bike leg in a Relay team), I didn’t take part in the race itself myself. However, eight weeks before the race when I knew I would be going, I said to my wife, “how do you fancy racing it?”. Given her only triathlon event during 2017 had been the Club Relays in Nottingham, and she hadn’t ridden her bike since then, it seemed like a good chance to both start and finish your season in one go. Eight weeks on the Wattbike followed to get ready.

One of the aspects that was a particular highlight of that Challenge race three years previously was the quality of all of the ‘stuff’ around the race – goody bags, pasta party, awards dinner and the like. Had much changed under the M-Dot banner? Not really – it was still pretty impressive. The race ‘goody bag’ rucksack was certainly a level above many of the ‘copy/paste’ versions we’ve seen any many races in Europe, while if Trucker hats are your thing, well, you got one of those too. A nice start and good first impression. 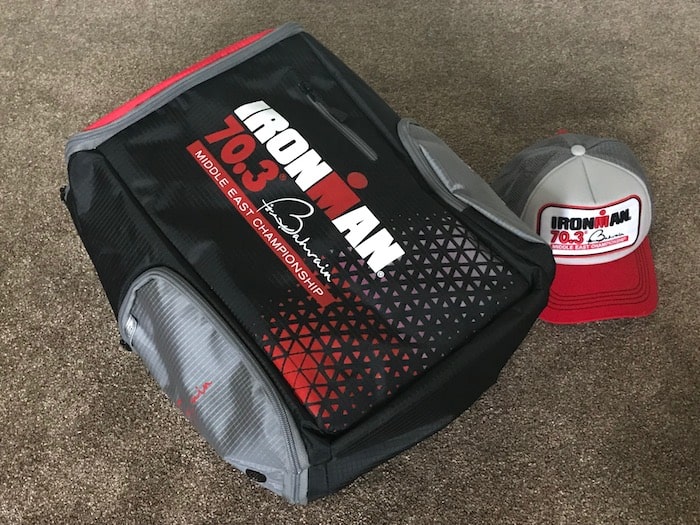 There was little to complain about in terms of the pre-race banquet / pasta party either. Taking place right next to transition on the Thursday night (ahead of the Saturday race), this definitely did bring back memories of the awesome food provided in 2014 at the Challenge event. There were EIGHT – I counted them (!) – different pasta dishes available in the buffet, extensive salads and I gave up counting how many different sweet options were provided. Something there to suit pretty much anyone and plenty of it too.

Clearly, it would appear that Bahrain takes hospitality very seriously. White linen table cloths, bottled water on the tables, soft drinks provided – we were even able to order post-meal coffee. Seriously, nothing to fault. 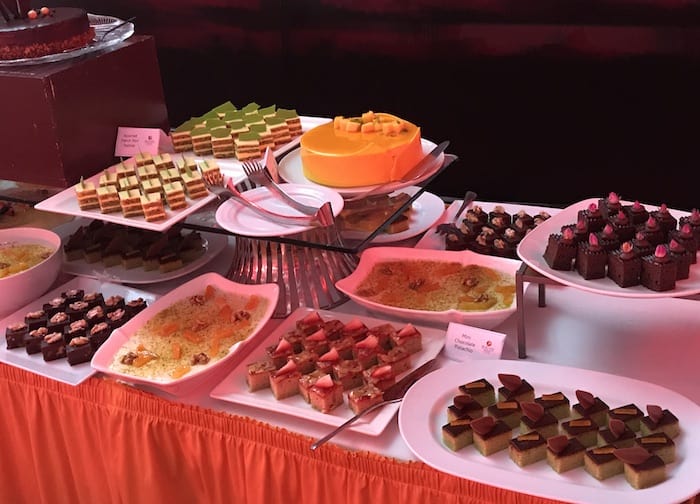 The race did however, in my opinion, make one error which could be resolved by a VERY simple communication update. On all of our pre-race information and even within the Athlete Guide, the event – which preceded the Race Briefing in the same specifically constructed venue – referenced ‘Opening Ceremony’. In truth, we weren’t 100% sure that this was in effect a pasta party / welcome banquet, until when we spotted a reference to it on a local site plan map of the race venue.

Given that the weather on the Thursday evening was a little wet and windy, the thought of an (external) opening ceremony of the “carrying flags down a road” type you typically get at ITU/ETU events would have not been that appealing – and perhaps explains why the venue didn’t appear as full as it deserved? Sorry to anyone that missed out. Hopefully the organisers will tweak their race pack for future year – because the effort that went in to preparing that food means it deserved to be enjoyed.

[UPDATE – the 2019 athlete guide has added the words Welcome Banquet – 7pm on Thursday at The Avenues Park, immediately prior to the race briefing. Nice one, don’t miss it!]. 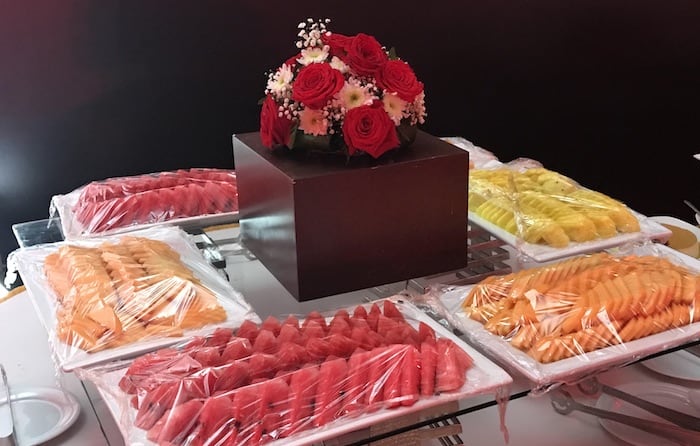 Now, when you go to Bahrain in November you are likely expecting some warmth – nothing too extreme, mid 20’s °c perhaps? Well, thankfully we did get that on race day… but only after some strong winds on the days ahead of race. The organisers made the (correct) decision – announced at Thursday’s Race Briefing – to not rack bikes as planned on Friday, but require athletes to bring these with them on race day morning. Having spoken to some of the event crew who had to do some significant transition rebuilding overnight, a wise decision. With less than 1000 athletes, this didn’t appear to cause any issues on race day from what we saw at least. Get there 15 minutes earlier than you original planned, job done, no worries.

Ahead of the 2017 event I did profile the course (HERE). By far the biggest change since we were last there – and an update on the two previous IRONMAN 70.3 races – was having one central race site, with T1 and T2 together. In previous years T2 has been based at the Bahrain International Circuit (BIC) race track which is about 30km away. Building upon the relative ease of travel to Bahrain highlighted in Part One, this was a massive improvement that further adds to the admin-free simplicity of this event. Not only that, it was achieved while still maintaining arguably the marquee element of this event – a circuit of the BIC within the middle part of the bike course.

Swim – the swim was a single loop, rolling start, taking place in the sheltered Bahrain Bay in the shadow of the Four Seasons Hotel and opposite the Bahrain World Trade Centre. I’m reliably informed by my wife (a very good swimmer), this was more challenging than it looked on paper; a combination of choppy conditions and some athletes somewhat over-estimating their swimming ability by starting far too close to the front. She loved it though, the harder the better, as it meant clear roads to get out on to the bike…

[UPDATE – the 2019 swim takes place in the same Bahrain Bay water, but the event hub moved from 2018 a few hundred metres across to The Avenues – the course map is HERE].

Bike – the winds that had been seen ahead of the race thankfully seemed to calm somewhat on race day, and fear of being blown around too much with deep rims and disc wheels subsided. Everybody – athletes and organisers – were more than thankful for that.

The road surfaces in Bahrain are excellent and the course is predominantly flat with the modest quoted 300m of net altitude gain coming in very close to the figure reported on Lesley’s Garmin data. Terenzo Bozzone (NZL) set the fastest bike split of the day with a very impressive 1:57:59 time. That performance was totally legit too, with Lesley recording a couple of hundred metres over the 90km on her post-ride stats. No short course here.

Run – Previously held at the Al Areen Wildlife Park next to the Bahrain International circuit, the all new four-lap run course was now based in a very contained area in and around the transition and finish. Each run lap actually passed directly alongside the finish line – possibly a painful site for those suffering with more laps to go, wishing they could turn off onto the red carpet! 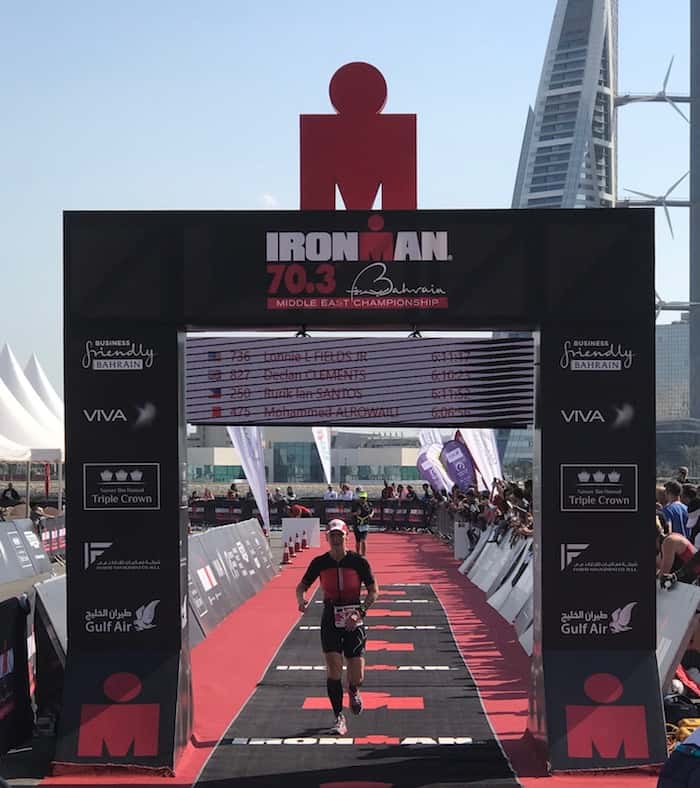 While far from anything that could be described as hilly, the roads did include a flyover section (which was part of an out-and-back), so there were some undulations. Having had an excellent swim and bike, Lesley’s lack of training was finding these tougher than she hoped!

[UPDATE – the relocation of transition from 2018 meant some changes to the run course, which is now three out-and-back loops and is almost totally pan flat. Remember, this is the course that Norway’s Kristian Blummenfelt set the fastest ever middle distance time on last year. You can see the new run course map for 2019 HERE].

If early qualification for the following years IRONMAN 70.3 World Championship is your goal, the race in Bahrain – a Regional Championship event – offered a generous 75 slots. Here are the details on the breakdown of that from the 2017 race: 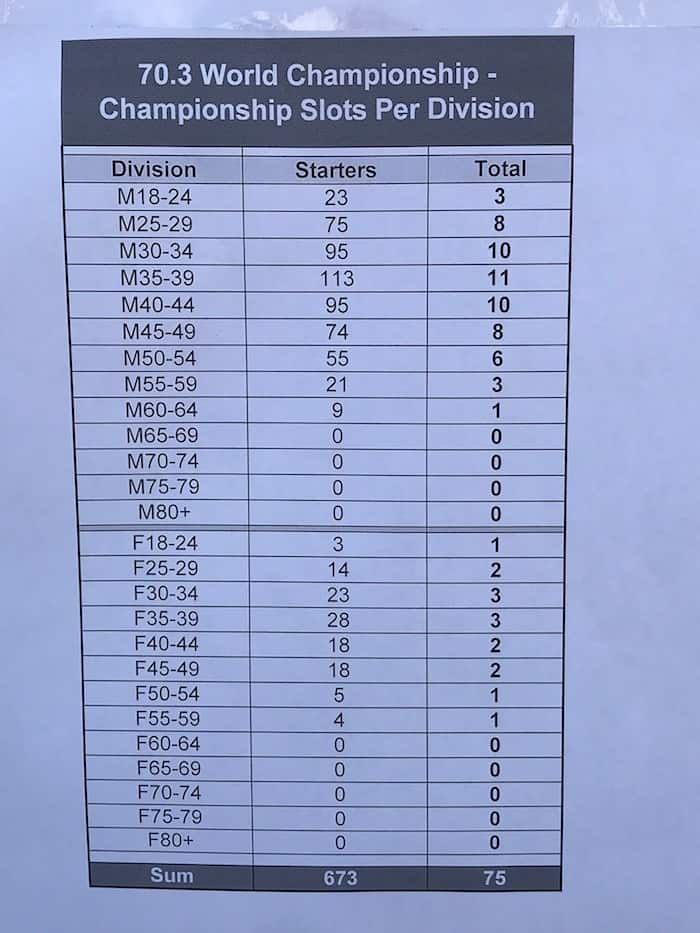 Despite being a 70.3 event, for some athletes, the IRONMAN 70.3 Middle East Championship in Bahrain was also in 2017 an IRONMAN World Championship qualifier in the Military Category. 10 slots were available and we met several British athletes there who were aiming to earn one.

One athlete who did just that – finishing second in the F25-29 category – was Becky Hoare, a previous winner of the Military Division in Kona in 2016. Becky was also the first British female finisher at the Norseman Xtreme Triathlon this year, reporting for us on her experience HERE. I asked Becky for her thoughts on the event:

“Bahrain 70.3. Possibly the ONLY 70.3 in the World where the finishes ‘t-shirt’ is a down jacket! Choppy swim, phenomenal bike course on pristine roads, a finishers banquet that was second to none and the best medals in the business!”

Will Bahrain offer those Military Division slots in 2018 and beyond? I’m not sure of the answer to that one – and with the recent update of the Ironman.com website, I can’t find where the Military Division information is any more. This is how the ten Military slots were allocated across the 113 Military entrants this in 2017:

[UPDATE – there are no IRONMAN Military Division qualifying slots at the 2019 event].

As Becky mentioned above – and as was the case at the 2014 Challenge race – no finishers t-shirts in Bahrain. Instead, a far more practical and impressive finishers jacket. 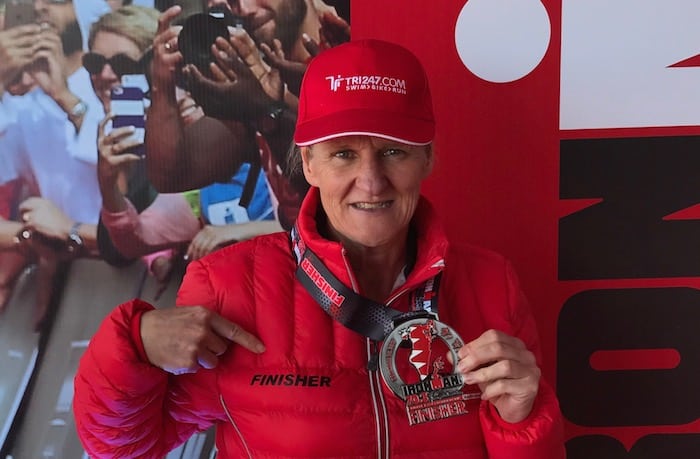 Bahrain doesn’t appear to do small medals either. While the 2017 IRONMAN 70.3 finishers medal wasn’t quite as big as the HUGE medal we got in 2014 at the Challenge Bahrain event, it is still rather impressive and substantial: 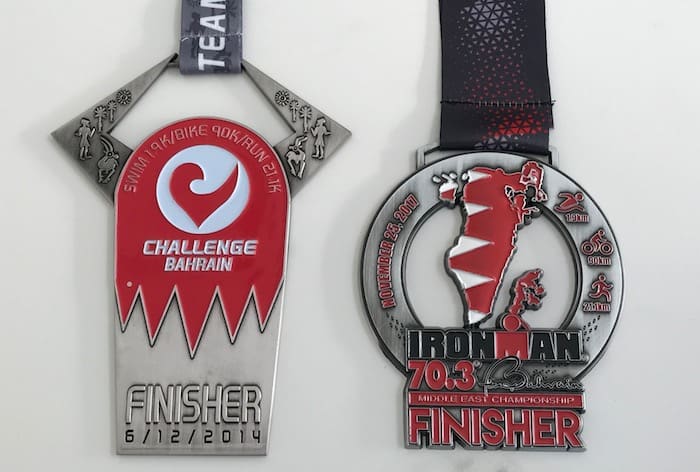 For some perspective on just how big those medals are, here is a side-by-side comparison to a medal from IRONMAN 70.3 Vichy (which is not ‘small’). If you are a medal Magpie and like a bit of bling, this race could be for you! 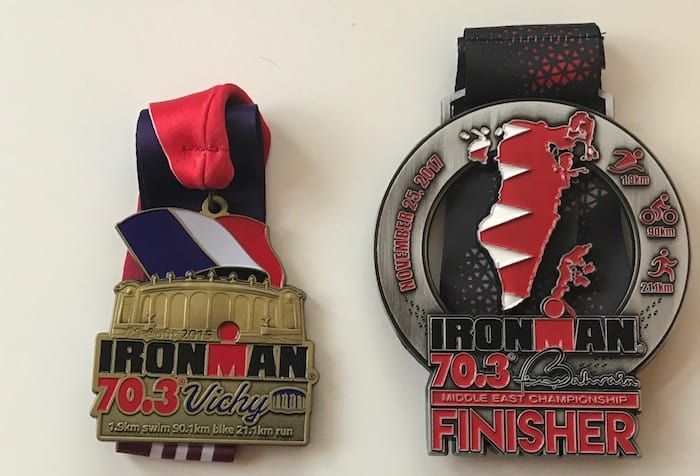 And finally on the awards front, Age-Group trophies might not be a major factor or consideration for those not contending for podium slots in their categories, but it is an area where is is easy to see if effort / thought has been made. There are plenty of events that are providing generic trophies/awards which have little or no relevance or connection to the location they are based in. Kona is the opposite of that – the tradition of the Umeke hand-carved wooden bowls is embedded in Hawaiian culture and make them the most iconic trophy in our sport.

There was no cookie-cuttter approach on the trophy front in Bahrain either. The trophies feature the M-Dot logo (of course…), but also the Bahrain flag colours and the outline map of Bahrain. Becky also assures me that the trophies are as substantial as they look; “It’s proper solid!”. We didn’t make the post-race awards ourselves, but we are reliably informed that the catering was just as impressive as the pre-race banquet was. 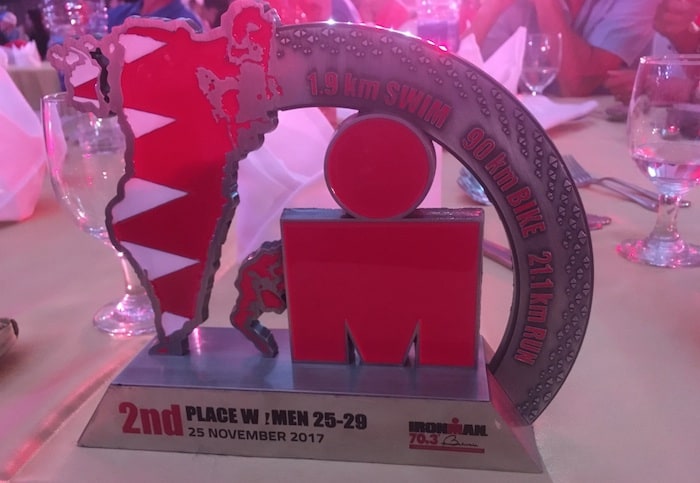 All told, the event is an impressive one. You have the full M-Dot organisation behind it, but with around 1,000 entries (including relays teams), it doesn’t feel like a corporate giant. The venue, co-located transitions and multi-lap run course make it about as ‘admin free’ as you will find anywhere, while the course provides great road surfaces and a ‘hook’ with the inclusion of the Formula 1 circuit. The little details – catering, medals, trophies, finishers jackets etc. also distinguish it from many others on the circuit. 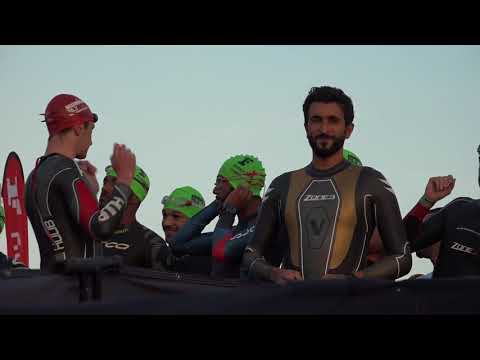 In the final part of the series, I’ll outline a few of the tourist options you might want to consider adding in during a trip to Bahrain, perhaps giving your family a break from your own triathlon objectives.