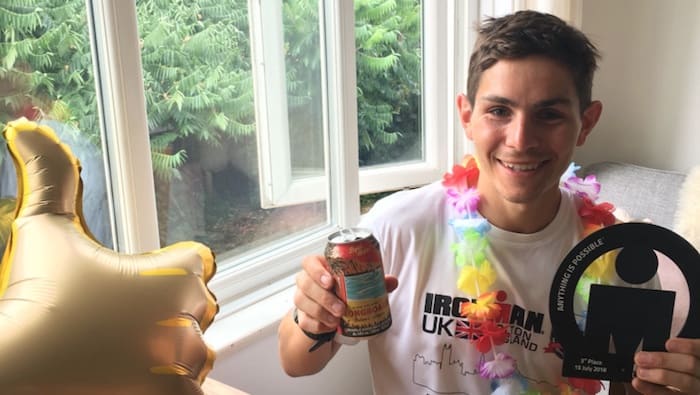 “Congratulations, you are going to Kona!”

What does it feel like to have qualifying for the IRONMAN World Championship as a target – and then finally achieve it? What did it take to get there?

Following the recent IRONMAN UK in Bolton, approximately half of the 40 slots were filled by British athletes, several of whom will be heading for the Big Island of Hawaii for the first time in October. One of those athletes was Joe Spraggins (https://spragginsblog.wordpress.com), a member of Clapham Chasers, who achieved his target despite a mid-race ‘incident’ which could well have halted progress there and then. (Well, it did halt his progress rather abruptly… but he able to get back on his bike and carry on!).

What was your sporting background, if any, before you got interested in triathlon?

I played some team sports at school, but I was more of a competitive eater. I just about scraped into the football and rugby teams, earning my place by being extremely keen rather than superbly talented. My sporting prowess before doing triathlon was best summed up one evening (after a few shandy’s) by my Mum; “Joe has always really loved sport, but sport has never really loved him”. Classic.

How did you get into triathlon, and when/where was your first race?

After university I found myself at a desk job in the city, a few pounds heavier than I’d have liked, and looking for a new challenge. On a whim, I entered the 2013 London Triathlon after being inspired by the previous years Olympics. I hadn’t swam for over ten years at that point (barring swanning around on a lido when on holiday), so bought myself some trunks and got cracking.

And IRONMAN – how did that go first time around?

It was three years between that first triathlon and my first IRONMAN. I decided, for a while, that I preferred running, so set about trying to improve that and experience some cool races in the process. Then the idea of doing a long-distance race came into my head, so I took the plunge and signed up for IRONMAN Switzerland in 2016.

I was very much a man without a plan, making it up as I went along. I had a standard road bike, with clip-on aerobars, and pretty basic kit. Looking back, it was a fairly decent first effort, going 10:39 despite having a less than enjoyable run with multiple bathroom stops. Crossing the line, I distinctly remember thinking, ‘never again’.

Were you aware of Kona from the start, and at what point did you make a conscious decision to make that a real target?

Ever since I discovered triathlon and IRONMAN I was fascinated by this mythical race in Hawaii. I’ve always been a sports geek, and I quickly went about finding out as much as I could about the event. It seemed like a brutal challenge; where do I sign up? Once realising it was something you actually had to qualify for, I think a switch in my head flicked – I had to be part of that one day.

We know you can run well (in swimming trunks, anyway!), how did your swim and bike stack up to that before you got ‘serious’?

My swimming certainly leaves a lot to be desired. I never swam as a kid, and this has really come back to bite me. I was consistently exiting the water and having to play catch up. Ray Gibbs, at Swim Canary Wharf, has been a massive help in the last 12 months.

My run fitness seemed to transfer fairly well to cycling, but I’ve had to work really hard on it for the last couple of years to get into a more competitive position heading onto the run. I certainly wasn’t setting any bike course records in those early days. 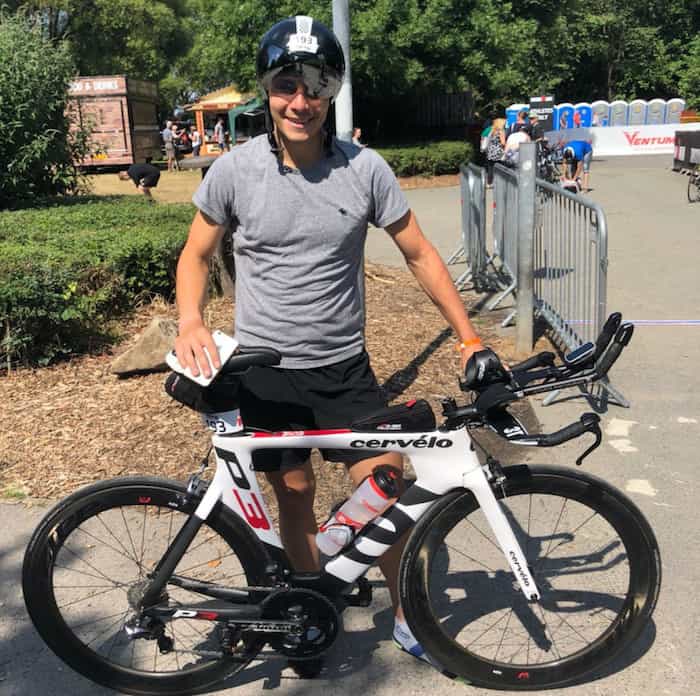 What is a normal training week for you, in terms of hours / number of sessions etc? Do you have a coach?

This year I’ve really stepped it up a level in terms of training volume; I try and train twice a day during the week where possible in addition to the longer sessions at the weekend. Some of these workouts in the week aren’t necessarily super structured; I might take the long way home through Richmond Park to make the commute 90 minutes instead of 20. I was averaging around 20 hours a week in the build up to Ironman UK.

This year I’ve been working with Paul Burton, who has taken the title of ‘Sporting Director’. Our relationship is a funny one – I first met him at Ironman Switzerland and stalked him for long enough until we became mates. He then said he’d help me with my biking this season; this quickly turned into him putting together a full training schedule for me. He really knows his stuff, and his help has been integral to my improvements in the last 12 months.

How have your IRONMAN races gone since that first one? Any disasters or times you have got close to that Kona goal?

After Zurich, I did two in 2017; the Outlaw and Ironman Wales. The Outlaw was an absolute disaster – I got five punctures and crashed into a bush. I jumped off the bike wanting to prove a point, and ended up running a 3:10 marathon, but I was still bitterly disappointed after all the hard work I’d put in. I had a much better day in Wales, enjoying myself immensely in what were some pretty brutal conditions. I actually ran myself into a qualifying position with 10km left of the run, but faded badly after an ‘over-enthusiastic’ start, and ended up missing out by just over two minutes. That was hard to take, but I knew I was getting close. 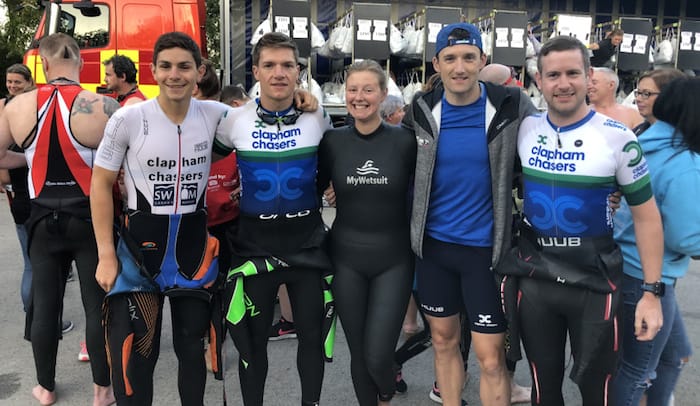 You qualified at Bolton – but not without incident. What happened during the bike leg?

After a decent swim, everything was going smoothly until mile 60 on the bike. A car had made its way onto the closed roads bike course, and just as I went to overtake him on the outside at 25mph, he decided to perform a u-turn in front of me. I ended up hitting him side-on and flying over the bonnet, ending up in a heap on the road. Miraculously, the bike wasn’t a write-off, and apart from some superficial damage, seemed to be handling normally. The same can’t be said for my left leg, which was causing me a large amount of discomfort. But I hadn’t trained hard for seven months solid to just pull the pin without at least trying to finish the bike leg.

Did you know how many slots were available for your AG – and during the race, did you have any information on where you were within your category?

Last year there were three slots, but I had a sneaking suspicion there would only be two this year. However, I had heard that Lewis Eccelston wasn’t focusing on Kona this year after his amazing performance in 2017. So, if he was ahead of me, I was pretty sure that top three would get me there.

As soon as I got off the bike, I had various family and friends updating me on my position and telling me I was in second. In normal circumstances, this would’ve been music to my ears, but the run in with the car had put a huge dent in my confidence (as well as my leg and his bonnet), and I honestly thought at that point that I wouldn’t be able to hang on.

At which point did you know that (unless there was a DQ you didn’t know about!), you had qualified?

I was running scared into the last lap. I’d dropped into third and was obsessed with the time gap back to fourth. It was only going into the last half a mile that I accepted that third was in the bag and I was 90% sure that this would be enough. Coming down the finishing chute was a special moment; seeing my friends and family watching on, I was struggling to keep a check on my emotions. But nothing was for certain until we went to the awards ceremony the following day.

What did you feel when you got called up, handed your qualification medal and had the lei around your neck?

There ended up only being two slots, so as they read Lewis’s name, I held my breath, even though he’d told me afterwards he wouldn’t be going. Once it was clear he wasn’t accepting, everyone was buzzing and Katie (my girlfriend), grabbed my wrist in excitement. Paul Kaye had barely got half-way through calling my surname before I was shouting ‘YES’ and run/hobbling down towards the stage. I couldn’t quite believe it was happening as they put the lei around my neck – it still all seemed like a bit of a dream.

What have been the biggest learning points / advice you would give to others who have made qualifying for Hawaii their target?

It’s not an overnight job (unless you’re ridiculously talented). You’ve got to put the work in, day after day, and be prepared to make some sacrifices along the way to get there. Having a proper plan in place and buying into the process this season has made a huge difference in results. No getting caught up in trying to nail a spring marathon or racing parkrun every other weekend – I sat back and looked at the bigger picture and decided what I wanted to achieve and how I was going to do that.

And any big mistakes that you would avoid with hindsight?

I used to get so caught up in who else was on the start-list, and would run through multiple different scenarios in my head on how the race might pan out. At the end of the day, you shouldn’t worry about what your competition is doing; just focus on your own process and concentrate on doing everything in your control at that moment to get to that finish as quickly as possible. Once I stopped worrying about all the external factors, I found it much easier to relax and race my own race.

What are your plans and expectations for the Hawaii trip? (Aside from having a lot less money than you do now!)

To say we’re excited about going to Hawaii is an understatement. We’ve got an amazing trip planned; the weekend before Kona, Katie is running the Chicago marathon (she’s the real athlete of the household), so we’re stopping there on the way over. After this we’re off to Kona, arriving on the Monday before the race. After spending the week on the big island, we’re going to explore the rest of Hawaii and enjoy some much needed recovery time!

In terms of the race itself, I always said that qualifying was the real achievement and taking part in the World Championships would be the reward for all the hard work over the years. However, now I’ve punched my ticket, I don’t think there’s any harm in pitching up at the start in the best shape possible and giving it a crack – I’m sure once we’re racing the competitive juices will start flowing.

Finally, will Kona be the end of a journey, or the start of another one?

This is a question I knew I’d never know the answer to until it actually happened. However, looking back at my performance in Bolton and actually, answering some of the questions in this interview, has made me realise that I’m still a relative newbie to this sport and I think I’ve got a lot more to give. I’m fairly certain Kona won’t be my last IRONMAN, as there are a heap of awesome races still on my bucket list.

You can find out more about Joe via: https://spragginsblog.wordpress.com