The busy summer of major international events in the UK continues next month with the Glasgow 2018 European Triathlon Championships. Already this year we have witnessed excellent events at the Eton Dorney ITU Paratriathlon World Cup, Acccenture World Triathlon Mixed Relay Cup Nottingham and the AJ Bell World Triathlon Leeds. With previous experience of the Strathclyde Park venue as host to the 2014 Commonwealth Games Triathlon, another quality event should be in store.

The Great Britain Elite team for the event has been announced today, and the home crowd should have plenty to cheer for with the inclusion of three Scottish athletes within the nine strong team. While he is named in the squad, Alistair Brownlee’s participation at Glasgow is still to be finalised and must be in some doubt following recent injuries.

British Triathlon has selected a team of nine athletes for the Glasgow 2018 European Championships, including defending champion, Jessica Learmonth. The multi sport Games get under way one month from today on 2 August, and the triathlon events take place 9-11 August in Strathclyde Park.

The Great Britain Triathlon Team features a mix of experience and youth. Defending champion, Learmonth and double Olympic Champion, Alistair Brownlee are included alongside new senior caps, Barclay Izzard, who is just 19, and Beth Potter, who has plenty of experience on the track and continues her progression as a triathlete.

There are individual European titles on the line as well as a Mixed Relay title for teams of two men and two women. The venue successfully hosted the Commonwealth Games in 2014, and Learmonth was part of the huge crowd that enjoyed seeing home nations success there. 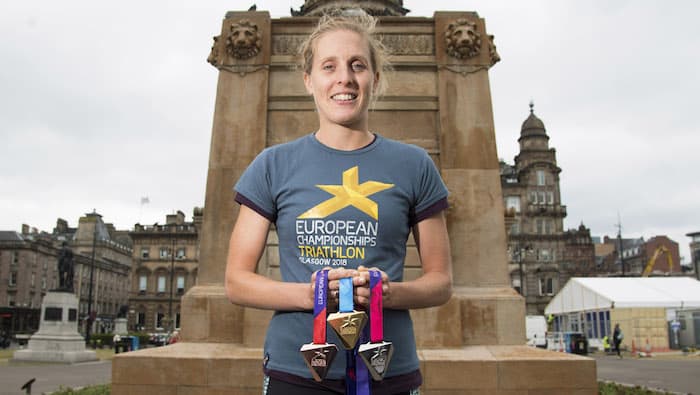 She said: “I watched the Commonwealth Games in 2014 and the course and the home support were incredible in Strathclyde Park. To have the opportunity to defend my European title there is something I’m really looking forward to, as well as potentially racing in the Mixed Relay.”

The women’s team also features Sophie Coldwell, second to Learmonth at the ETU European Championships last year and 2016 champion, India Lee. Non Stanford adds further experience and is a serious contender for the title, and Beth Potter will relish the opportunity to race a major triathlon championships in her native Scotland.

Alistair Brownlee is included in the team but will need to assess his fitness following injuries closer to the start of the championships before confirming his place on the start line.

Marc Austin, the 2018 Commonwealth bronze medal winner will be racing in front of a home crowd, as will Grant Sheldon, and Loughborough University student, Barclay Izzard makes his senior debut having won a round of the ETU European Cup in March in Gran Canaria, Spain.

Austin still reflects on the 2014 Commonwealth Games as one of the biggest experiences of his life and says the European Championships will be a ‘massive aim’. The home crowd carried the young Austin around the bike leg with Alistair and Jonathan Brownlee. Now the 24-year-old has an opportunity to write some new history.

Spectator tickets are still available by visiting the Glasgow 2018 website.

“The Europeans in Kitzbuhel was a bit of a breakthrough last year with winning silver. I’m really looking forward to racing at home this time and being part of a wider Games involving other sports too. I hope the crowds will come out and get behind us as it really helps!”

“The European Championships is really important to me and I’m excited to be coming back into good form in time to race in Glasgow. I’ll have family and friends supporting me there and hope the crowds will come along to support us.”

“It’s great to have a major Games here in Great Britain and I’m feeling positive about how my training is going, so it’s really something to look forward to next month.”

“I’m really excited to be included in the triathlon squad for the European Championships. It’s really special to be racing a major games in Scotland, and I feel like it’s another progression in my triathlon career to be representing Great Britain as part of a really strong team.”

“It’s a massive honour for me to be included in this squad for my first senior international. I intend to make the most of the opportunity and can’t wait to race in Strathclyde Park.”