The Collins Cup: who might be in the teams (and who gets what money…)?

The Collins Cup 2020 – an early look at the potential teams

As I’m sure you’ve seen, either on TRI247 (HERE) or elsewhere, the ‘Ryder Cup of Triathlon’, the Collins Cup (www.thecollinscup.com) was announced this week.

The first major project from the many years of behind-the-scenes efforts of those involved in the Professional Triathletes Organisation (www.protriathletes.org), after a few false starts and delays, will debut at the end of May in Samorin, Slovakia. The ‘$2million prize purse’ tag – more than three times the Kona total – certainly grabbed some headlines. More on that below.

Who gets to race?

Thus, each team will comprise of 6 men and 6 women, racing over the middle distance, in a series of 12 matches.

How you get selected is via two routes:

(** it is possible that a ‘selected’ athlete might not accept that place – injury, illness, other commitments (e.g. ITU season), and thus I would expect in such an instance that the auto-qualifier position will roll down to the next available athlete in the rankings).

In summary, it’s a process that is along similar lines to the Ryder Cup and provides a route to qualification through performance (via the rankings), but also offers flexibility / opportunity for a ‘wild card’ selection too.

For example, if a quality athlete is relatively low in the rankings because injury has prevented them racing, but is back to form by selection date – or you have a World Champion like Gustav Iden who has only raced over the 70.3 distance twice in the last two seasons.

Personally, I would like to see the “Captains’ Picks” truly being just that, eliminating the ‘committee’ reference and involvement. That would enhance the scrutiny, speculation and ultimately judgement as to whether they have chosen well, putting additional responsibility on the Captains’ position. If you are familiar with the Ryder Cup, you’ll be familiar with the (heated) discussions around this very point – and ongoing interest leading up to, during and post-event will be crucial to success.

The biggest talking point – and ‘issue’ for many – is the $2million prize purse. Or more specifically, it’s allocation.

Firstly, it’s worth noting a couple of things to give some (relative) context versus the history of our sport:

Sounds good, and with the difficulty that most Pro triathletes have with maintaining a sustainable career, in aggregate at least it is certainly a massive step forward. What does stand out though, is that the allocation of the prize money is not based upon either the result of that athlete at the event (either within their ‘match’ or indeed, relative to other matches), or even the overall success of their team.

The top-ranked athletes get the big(ger) bucks, with the full breakdown being based upon the PTO World Rankings™ ahead of the event in what is effectively appearance fee format: 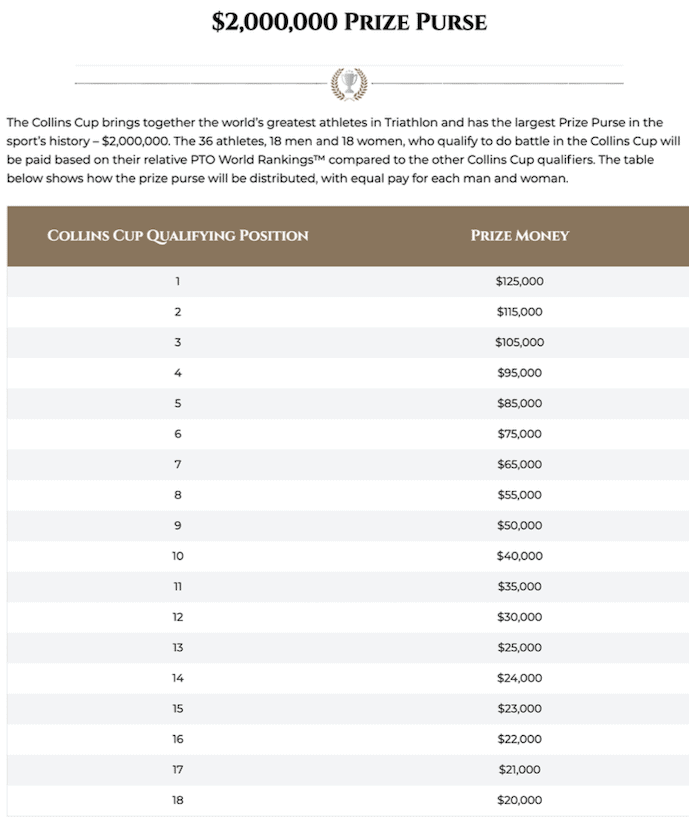 Of course, that raises some obvious questions – to which the PTO’s response is provided in their FAQs on the Collins Cup website.

It needs to matter…

Whatever the prize money is and whatever method is used to allocate and award it (now, and in future years, since as a members organisation the athletes will have an opportunity to change things over time), the viewers belief and trust that the event truly matters to the athletes taking part is, in my opinion, perhaps the biggest key to its success.

The passion of both the players and supporters at the Ryder Cup is intense; making the team is truly an honour, being overlooked for selection is devastating and typically, a losing Captain will be critiqued and questioned, while poor performance from a player will be analysed in depth.

For the Collins Cup to work, WE NEED THAT PASSION FROM EVERYONE INVOLVED.

Many would argue that it took until the winning putt from Sam Torrance in 1985 to win the cup for Europe, that the Ryder Cup truly gained it current status and importance. We can’t wait the best part of 60 years to reach that point, but equally, making it ‘matter’ from a standing start isn’t easy either.

To quote Boxing promoter, Eddie Hearn: “No passion, no point”.

So, who’ll be racing?

Ok, so what follows is an outline of what the 2020 Collins Cup teams would be, if they were selected now – but with some key assumptions:

And with those assumptions, these are what the teams would look like now. (The PTO World Rankings will of course start to change, with IRONMAN 70.3 South Africa the first points scoring event of 2020, coming up this weekend).

Team Europe would have to be considered the strong favourites, with the athletes selected and their ranking reflected in the overall percentage of the prize pot that would potentially come to them in aggregate.

An alternative view, might be to say – given the above teams and the assumptions given – what is the ‘average PTO World Ranking by team’:

However you look at, Europe would have to be the early and strong favourites to raise the first Collins Cup.