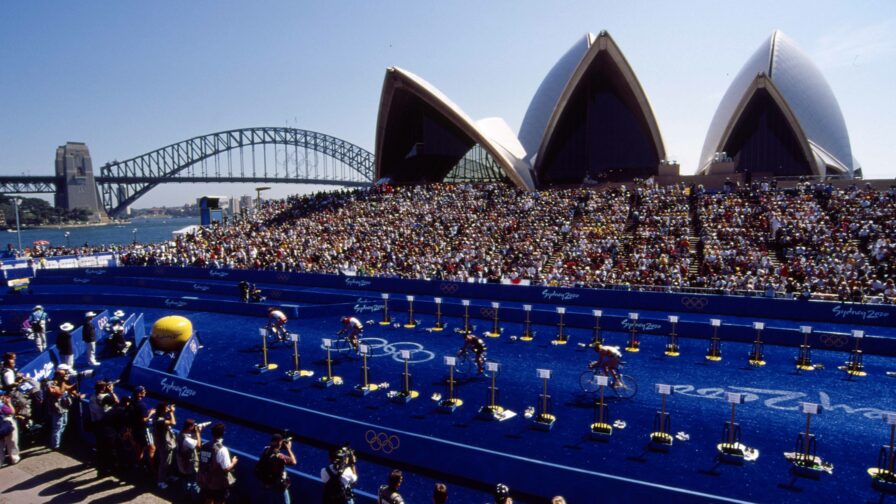 The history of triathlon in the Olympic Games may be relatively short since its introduction in 2000, but already it has provided some incredible moments.

The sport’s maiden appearance at the Games came after years of exponential growth in popularity across the world, following the first recorded in triathlon in San Diego, USA back in 1974.

By 1988, the sport had attracted the interest of the International Olympic Committee (IOC), which kickstarted the debate over including triathlon in the Olympic Games Programme.

The International Triathlon Union (ITU) was formed the following year, and after the success of the first World Triathlon Championships in Avignon, the sport was voted into the Olympic Games at an IOC Congress in 1994.

Triathlon’s debut at the Olympics eventually came in Sydney in 2000, featuring a draft-legal format which has been used at the Games ever since.

As they are today, the men’s and women’s events were raced over what is now known as Olympic distance, composed of a 1.5km swim, 40km bike and a 10km run.

There have been nine different gold-medalists across the five Games where triathlon has been contested, with Great Britain’s Alistair Brownlee the only athlete to retain a title, at Rio in 2016.

Partially thanks to Alistair’s efforts, Great Britain have won the joint most Olympic triathlon medals with five, a figure matched by Australia and Switzerland

The Swiss have claimed golds through Brigitte McMahon and Nicola Spirig in the women’s event, while Australia’s Emma Snowsill claimed victory at Beijing in 2008.

Fort Copacabana in Rio de Janeiro played host to the most recent Olympic triathlon, which proved to be a fruitful endeavor for Great Britain, who grabbed three medals across the two races in Brazil.

Alistair Brownlee successfully defended the title he had claimed at London 2012 with a sensational performance which saw him outrun brother Jonny to cross the line six seconds clear.

Jorgensen dropped Spirig (2012 champion in London) on the run to finish 40 seconds clear.

The 2012 Olympics in London threw up two memorable races, with Spirig edging out Sweden’s Lisa Nordén to a photo finish in the women’s event.

Alistair Brownlee claimed his first Olympic triathlon gold in Hyde Park after dropping Spaniard Javier Gómez with around 3km of the run to go.

Gómez took silver ahead of Jonny Brownlee in third, who was handed a 15 second penalty for an infringement during the first transition.

In worrying scenes, the bronze-medal winner collapsed almost immediately after finishing the race, which was later revealed to be as a result of heat stroke.

The Brownlees became the only British siblings to date to win medals in the same individual Olympic event.

A 22-woman strong group splintered following the conclusion of the bike leg, with the five athletes heading into the final laps of the run course in close proximity.

After a sensational finish, Spirig was adjudged to have beaten Nordén to gold by just 15cm, while Australia’s Densham beat USA’s Groff to the final spot on the podium.

The 2008 races in China both made history, as Bevan Docherty and Simon Whitfield became the first athletes to secure multiple Olympic triathlon medals.

Germany’s Jan Frodeno came out on top of an exciting sprint finish at the Triathlon Venue at the Ming Tomb Reservoir in Shisanling.

Heading into the event Frodeno – now a household name of triathlon – was a relatively unknown quantity on the international stage, but he announced himself to the world with an incredible display.

Up against the likes of Canada’s Whitfield – who won Olympic gold in 2000 – and 2008 World Champion Gómez, Frodeno produced a power-packed finish to edge ahead over the closing metres and claim a shock win.

Having become the first female triathlete to win three world titles, Snowsill was a strong favourite heading into the 2008 Olympics.

And the Australian lived up to that billing in China, fending off an athlete who had dominated international draft-legal racing in the preceding years in Portugal’s Vanessa Fernandes.

After a large contingent led the field out of the second transition, Snowsill produced what proved to be unmatchable pace on the run to claim gold ahead of Fernandes and compatriot Emma Moffatt.

The second-ever Olympic triathlon at the Vouliagmeni Olympic Centre in Athens produced six different medalists to the two races four years prior.

New Zealand picked up a one-two in the men’s event thanks to stellar performances from Hamish Carter and Bevan Docherty.

Marc Jenkins may have finished last in Greece, but the British athlete produced an iconic Olympic moment as he ran the final two kilometres of the second leg carrying his broken bike on his shoulders.

Australia’s Loretta Harrop led for much of the race, and looked set for victory as she entered the closing stages of the run at the front of the field.

But Austria’s Kate Allen, who exited the water in 44th place, had battled her way into contention after a strong bike leg saw her climb to 28th.

It was her scintillating final leg which earned her the gold, as she removed a gap of almost three minutes to Harrop before breezing past and finishing seven seconds clear.

Triathlon endeared itself to Olympic fans on its debut at the competition in Sydney, as both races provided exciting finishes.

A late burst from Whitfield saw him take gold as he overhauled Germany’s Stephan Vuckovic on the closing stages of the run.

Whitfield had crashed on the bike leg, but showed remarkable resilience to recover and work his way back to the front of the field.

The Canadian wrote his name into Olympic triathlon folklore as he crossed the line first in front of the Sydney Opera House, 13 seconds ahead of Vuckovic and over 20 seconds clear of Czech Republic’s Jan Řehula.

The day prior to the men’s race, McMahon produced a similarly resurgent run to Whitfield to become the first ever Olympic triathlon gold medalist.

It was the first event on the first day of the Games, with the backdrop of the Opera House and Harbour Bridge providing the ideal way to spectacularly introduce Sydney to a global audience.

McMahon crossed the line just two seconds clear in an incredible finish, with Magali Messmer earning Switzerland another place on the inaugural podium as she came home in third.

Next instalment: Olympic Triathlon in 2021

Tokyo 2020 gets under way in July just one year late following the COVID-19 pandemic.

You can get all the details on when the races take place – and how you can watch on TV – in our full event guide.