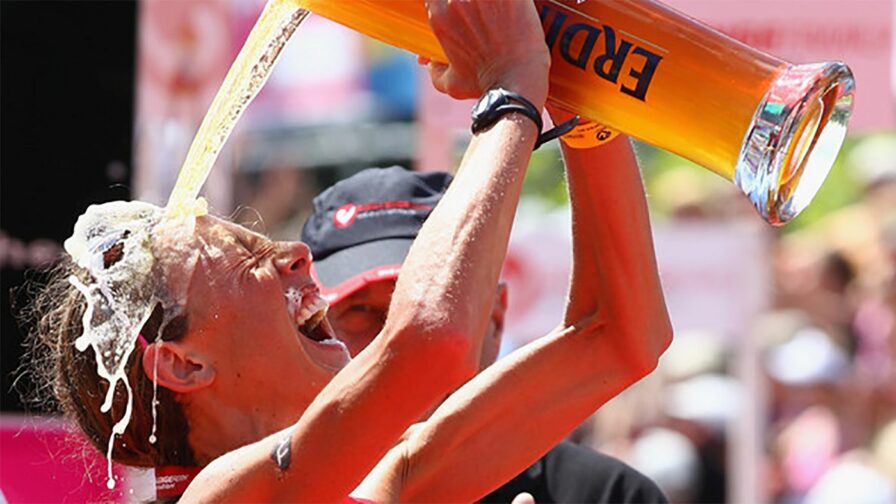 It was – and will continue to be – widely written and reported that Chrissie Wellington “re-wrote the record books” at Challenge Roth in 2010, recording a breathtaking time of 8:19:13 for the iron distance. A year later, she did it again!

Well, here is one of those “record books”, and it too has been re-written once again.

Sport and numbers seem to be a perfect marriage. Whatever your sport, or whatever your ability, sooner or later you’ll invariably be creating targets based on time. Whether that’s making the 17-hour Ironman cut-off, running a sub-three hour marathon or beating 25 minutes in your club ’10’, everyone likes to break a barrier and set a personal best.

And, following the excitement from Quelle Challenge Roth (2009), and the fantastic world best figures of Chrissie Wellington, I thought it was a great opportunity to look, in depth, at ladies iron-distance performances. Recording a ‘sub-nine’ (hours) time for ladies, is a natural goal for many of the elite athletes in our sport, (just as going ‘sub-eight‘ is for men), but, how often has it been done?

I didn’t know. I researched extensively, and as far as I could see, nobody else knew either. I even found websites dedicated to this very subject – and realised I knew more than them anyway!

And so, it started… many hours of head-scratching, web surfing and historic magazine research – too many hours! – and I realised, not quickly enough, that I’d embarked on an “I’d started, so I had to finish mission”. This definitely comes with a ‘don’t try this at home’ warning. But I digress.

What follows is a result of that mission. Should you think I’ve missed any, please send me the details ([email protected]), as my aim is to create the definitive list of sub-nine hour female iron distance finishes. The only downside of all of this work? I then had to do the same task for the sub-eight hour men!

As at 15th April 2018, 74 women have now finished an iron-distance triathlon with an 8:XX:XX clocking, and we now have 172 sub-9 female finishes recorded.

However Ironman Austria (Klagenfurt) comes closest now with 22 following the 2016 edition. Roth was also the venue of the first ever sub-nine clocking from Thea Sybesma (NED) in 1991, in what at the time was ‘Ironman Europe’.

Following Chrissie’s quite staggering performances at Roth 2009, Roth in 2010 and Roth 2011, added to her figures from Ironmans Arizona and South Africa, Chrissie held the five fastest iron-distance times ever.

Those top five times, along with her Kona course record (2009) were all achieved in consecutive races…which she followed up with arguably her greatest performance ever at the 2011 Ironman World Championships, even if it wasn’t (quite!) a Kona record. Quite a form line.

Want some more Chrissie stats? 2011 was the second time (2009 being the first) that Chrissie has achieved three sub-nine hour finishes in one year.

Indeed, you have to go back to Kona 2008 for the last time Chrissie didn’t finish with 8:XX on the clock – and that was the year that she spent 10+ minutes on the side of the road with a puncture… and still won with a finish time of 9:06:23. It’s now eight consecutive sub-nine finishes 2009-2011 inclusive (and nine in total). Raising the bar for sure – though no more following Chrissie’s Ironman retirement.

In 2008, Chrissie Wellington received much comment about celebrating ‘too much’ on the run-in to the line in Frankfurt, and thus missing the then world best of Paula Newby-Fraser (8:50:53).

Things have moved on so quickly that Chrissie’s 8:51:24 from that race doesn’t even make the top-50 now anyway – and following Daniela Ryf’s 2015 efforts, it isn’t even the course record any longer!

The performance of Cat Morrison at Roth 2009 was surpassed by Mary Beth Ellis as the fastest debut iron-distance performance following her Klagenfurt 2011 win (8:43:35).

That said, Eva Wutti’s 8:37:36 at Ironman Copenhagen 2013 was her first Ironman finish – but not technically a debut, having been a DNF earlier in the year at Ironman Austria.

Eva has since added a second entry to this listing with another win, this time at Challenge Barcelona 2013 (8:51:01), a third at the same race (this time under ‘Ironman Barcelona’ branding) to defend that title a year later in a new course record of 8:49:21 – and now a fourth on home soil at Ironman Austria 2015.

Yvonne Van Vlerken recorded her first sub-9 clocking for more than four years when winning Ironman Florida 2012, which was the fourth time she has achieved that, leaving her tied for third place (with Paula Newby Fraser) behind Chrissie Wellington (nine) and Rebekah Keat (five) in the “most sub-9 finishes” all-time list.

Not content with that, Yvonne came within seconds of her own PB figures while finishing second to Caroline Steffen at Challenge Roth 2013 (8:46:22) to join Rebekah Keat on five sub-nine’s, only to then recorded her best ever time (8:43:07) when winning Ironman Florida 2013, just weeks after taking fourth place at Kona.

That was six, but with Challenge Roth 2014 (8:59:36) and now Melbourne 2015, Yvonne Van Vlerken was just one short of Chrissie’s record, with eight sub-nine finishes to her name. No longer… as another Challenge Roth victory in 2015 means that Yvonne now pulled level with Chrissie, only to become the first woman into double figures with her tenth sub-nine finish at Ironman Barcelona 2015. She is showing no signs of stopping and went to eleven following Challenge Roth 2016, twelve at Ironman Arizona 2016, 13 at Challenge Almere-Amsterdam and 14 at Ironman Barcelona!

Erika Csomor made it three sub-nine clocking’s at Ironman Austria 2011 (and added a fourth in 2013 at the same event…. and then a fifth at Ironman Florida!), while Gina Crawford (née Ferguson) made it three for her at Challenge Roth 2012 and four at Ironman Frankfurt 2014.

Rachel Joyce achieved her third at Ironman Texas 2013 a fourth at the Ironman World Champs 2013 and a fifth at Challenge Roth 2014, where third placed Caroline Steffen has matched her with five. (One ‘might’ (!) argue that it should/could be six – but her win at Ironman Cozumel in 2013 was on a shortened swim course due to sea conditions).

The very latest additions to the listing is include yet another fast British athlete, as Corinne Abraham’s 8:52:40 at Ironman Frankfurt makes her member #47.

Something new – Daniela Ryf becomes the first female athlete to break the 9-hour barrier twice in a week, following Challenge Roth and Ironman Switzerland. Would that impact her efforts in Kona – not at all, as she went on to break the course record and defend her title in Hawaii.

Members #65 and #66 are Susie Cheetham (winner) and Haley Chura (third) at IRONMAN Brasil, while second placed Sonja Tajsich (GER) recorded her third 8:XX finish in Florianopolis. Sarah Crowley (AUS) won IRONMAN Cairns (Asia-Pacific Champs), to become member #67 of the Sub-9 Club. The latest addition (#68), is Lisa Roberts courtesy of third place at Challenge Roth 2017 – a race in which Laura Siddall set a PB, improving on her figures from 12 months previously on what was widely regarded as a much tougher new run course.

Member #69 is Daniela Sammler and #70 is Katja Konschak, both at the IRONMAN Barcelona 2017.

While Daniela Ryf racked up her ninth career Sub-9 finish when winning a third consecutive IRONMAN World Championship, Great Britain’s Lucy Charles joined the Sub-9 Club as member #71 thanks to her brilliant second place finish. What’s more, she is part of a select club of just six athletes to have finished with an 8:XX time in Kona.

Member #72 (Helle Frederiksen) and #73 (Jen Annett) joined the Sub-9 Club at IRONMAN Arizona 2017, where they finished second and third respectively behind Kaisa Sali (FIN), who won with her third career 8:XX finish.