#GBKona 2018: Gill Fullen’s Hawaii dream is over. For this year at least…

Even the best-laid plans don’t always go your way

Qualifying for the IRONMAN World Championship in Kona may be a life’s dream for many athletes. For some, getting there is only step one – reaching the podium and collecting the most iconic trophies in the sport, the hand-carved Umeke bowl – is their motivation.

Gill Fullen already has one of those at home – but unlike almost everything else in her truly incredible Age-Group collection, it isn’t the biggest bowl reserved for the winner. Having won almost literally ever major championship available at European and World level, Triathlon and Duathlon, Middle and Long Distance (several of those multiple times), winning in Hawaii was her “ultimate goal” this year.

Having recovered from cancer and returned to remarkable success in 2017 (winning both the Outlaw Half and Outlaw Full – overall – and another Duathlon World Championship along the way), Gill’s 2018 season was building with her training focussed on Kona.

She will be there… but won’t be racing. This is why.

Ignoring your puncture at the ETU Powerman Duathlon Champs in May, it’s been a good year with double wins in Fyn (Duathlon World Champs and Long Distance World Champs), and at the IRONMAN 70.3 Euro Champs (Elsinore) and IRONMAN Copenhagen. Until a week or so back, you must have been pleased with the year?

As you well know, I’m rarely totally happy with my performance. I set myself a range of goals for each race, knowing the top ones are probably unattainable and the lower ones represent baseline survival mode. This year I’ve hit some middle goals but not achieved what I really had in mind. Finishing four out of six races doesn’t feel like a great result for the year. Yes, I’ve shown some good form and produced some strong results but all the races were leading up to the ultimate goal, so I don’t feel very fulfilled. In comparison to the fairy tale 2017, this year hasn’t exactly gone to plan. 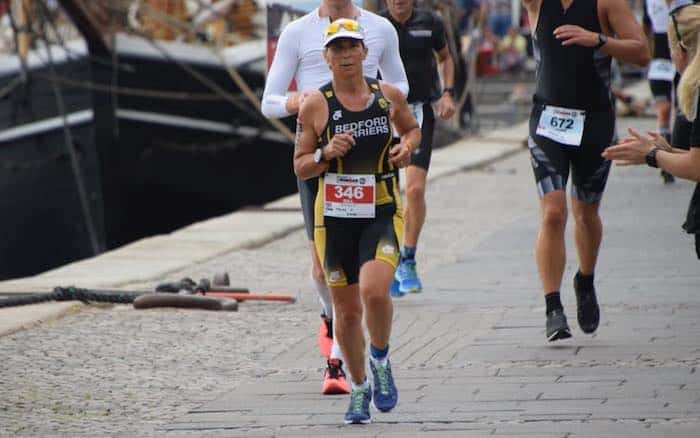 And then… what happened?

Training had finally picked up to the all-consuming IRONMAN obsessive level and I was loving it. I’ve brought the horses at the stables in from the fields every night for about the last five years, so its completely routine. On this particular evening the two horses I was leading were in a daft mood; one spooked at something on the right whilst the huge chestnut lump on the left spooked the other way, planting his clumsy great iron-shod hoof on my left foot and grinding it into the hard-packed path for good measure. He seemed oblivious that I was screaming at him to move. 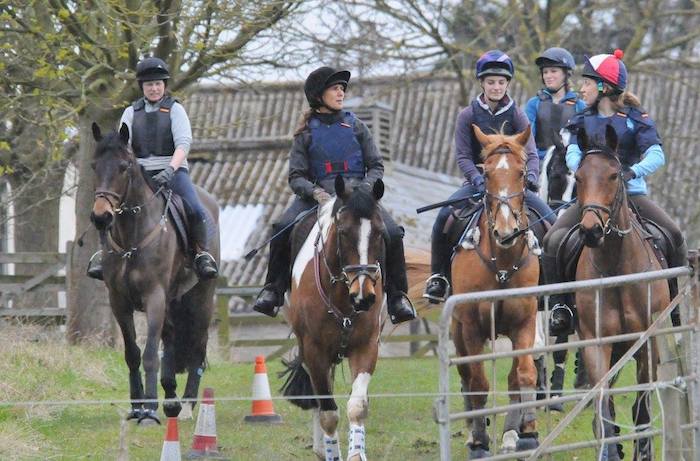 How quickly did you realise – that’s it, Kona is out for me?

I didn’t. I hobbled home and put my foot up for the evening smothered in ice packs and arnica and taking Ibuprofen like it was going out of fashion. Obviously I tried running on it almost immediately and decided it wasn’t broken. In the morning it wasn’t hugely swollen so I squeezed it into my riding boot and went to sort the horses out. Walking across the yard I could feel a grinding on the outside edge of my foot so I thought I probably ought to go and get it x-rayed. I had a five hour bike session that day though, so I could do it after the ride.

Catching the edge of my foot on some rough ground was too painful to ignore and I was in a very black mood, so I decided the friends I was intending to do some of my ride with would not appreciate me biting their heads off. Time to change plans and get the x-ray before biking. I put the bike and my gear in the car so I could go straight from the hospital and catch up with the cycle group. Early Saturday morning is not a bad time to go to A&E so I was seen fairly quickly. The radiologist didn’t hold back and confirmed a fracture. At that point I began to deal with reality. Putting the velcro boot (cast alternative) on, I was still asking the nurse if running a marathon in three weeks was going to be possible. I hadn’t hit baseline reality yet. I had to step out of A&E to have a good rant and lose it briefly before going back in to arrange my appointment with orthopaedics. At this point I started facing the truth. It wasn’t pretty.

I had the fear of god put in me by the physio, who knows me way too well and went all out to stop me doing anything on the foot until I saw a consultant. There was talk of surgery to stabilise the break and make sure the fracture would stand the strain of training. The specialist however, thank goodness, has decided it will heal without intervention so I’ve four weeks in the boot then another two weeks before even contemplating gentle shuffling.

Have you been able to train at all?

For the sake of my sanity luckily I’ve been able to swim, so that’s been taking a couple of hours a day and keeping my mental health somewhat intact, (sorry fellow early morning swimmers). All the swimming has been with a pull buoy so the fracture doesn’t move. I was advised to leave biking until the fracture was more stable and obviously I’m doing minimal walking in the boot so not a hint of running. I’ve been sent some core exercises and upside-down running by a friend, which I probably ought to try, but I can’t say they enthuse me. I fear aqua-jogging may be on the cards in the not too distant future.

On an Age-Group level, you’ve won pretty much everything that is available to you in terms of Middle and Long Distance, both Duathlon and Triathlon… outside of an Age-Group win in Hawaii. How big a target was (and is) that for you?

Huge. I thought I’d put Kona to bed with a podium placing last time despite mechanicals but it seems it’s still nagging at me as unfinished business. I watch the feeds from the race each year and all I do is wish I were there.  OK so I’m pretty desperate, I admit it. Losing the chance to go out this year when I’ve had a solid year of great training is the most devastated I’ve been. It’s taken a couple of  weeks to come anywhere near getting my head around it. I’ve not been a joy to be around.

As we know, you went through a major health scare in late 2016/2017. Does having gone through that make missing a race any different – or is the frustration just the same as it would have been before?

Strangely, it’s worse. I can only put it down to the fact that the cancer made me value every opportunity and make the most of every day. I had a great shot at the title this year and I can’t guarantee that next year I’ll be able to race, proven this year with a random accident! Next year seems a lifetime away. I need to qualify again, which is never guaranteed. I’m also mega aware that I’m not in my 20’s any more and at some stage I’m going to stop getting faster. The frustration at not racing this year is immense.

As it has happened quite late, will you still actually be travelling to Kona or have you managed to cancel hotels / flights and such?

I did have travel insurance but my family have booked to go out and they wouldn’t be able to cancel, so I’m sort of obliged to go. Hubby has been looking forward to a holiday too, so we’re still going. It will be a test of character for me to watch the race and cheer people on. The one person I really want to see finish is Tim Don. His injuries were so severe and he’s made such an unbelievable comeback, that will be really inspirational for me and I’m sure many others.

Does this make Kona 2019 an even bigger goal now – and any plans yet for the 2019 season and how to get there?

I guess so. I’ve re-thought my 2019 season and have given a few suggestions to coach. I have yet to hear back, so I’m not entirely sure what the focus will be. If I go for Kona the early season priority will be needing to re-qualify, which is annoying as there were other things I’d have liked to do. I’m quite keen to get to the IRONMAN 70.3 World’s again as they are in beautiful Nice, so I’d need a Q race for that too. All this is obviously not cheap, so there’s a limit to what I can do, especially if the mega-money Kona trip has to be afforded again.

Just realised that you move up an Age-Group in 2019… perhaps quite a worrying prospect for anyone racing you, with unfinished business adding further to your motivation?!

It’s actually really disappointing; I don’t want to move up, I was relishing the challenge of proving that I’m still competitive even at the top end of the current age group. Next year no doubt I’ll be told it’s an easier task to podium, but I’m not interested in it being easier, it’s the challenge that drives me.