It really has been a special weekend for the Elite athlete of British triathlon across all distances – and we are still catching up with it all. After big wins yesterday in Utah at IRONMAN 70.3 St. George from Alistair Brownlee and Holly Lawrence, by lunchtime today there had been (at least…) another four major wins around the world. We’ve already report on Laura Siddall at IRONMAN Australia – next up, the Chengdu ITU Triathlon World Cup in China.

A week before the third round of the ITU WTS Series in Japan, this World Cup (one tier ‘below’ WTS) race was a two-day, semi-final and final format. As we reported yesterday, all of the Brits with the exception of Liam Lloyd, made it safely through the sprint-distance qualifiers, for what would be a fast a furious super-sprint (400m / 10km / 2.5km) final.

In the women’s final, Stanford took the lead early in the run and was then never headed, taking the tape with a (relatively…) comfortable winning margin of four seconds over Laura Lindemann (GER) and Kirsten Kasper (USA). Sophie Coldwell was the next best of the Brits in sixth, with Jessica Learmonth and Lucy Hall just a few second back in 11th and 12th.

Nice to wake up and see @NonStanford in a familiar position at @worldtriathlon #ChengduWC… great result Non 🏆 pic.twitter.com/5zZWmv0MiJ

Speaking to ITU Media after the race, Stanford commented:

“Is always great always to star the season with a win, but I was not confident until the end, because everything was so quick. The key thing today was to have good transitions, and I’m not known for my good transitions, so I just focussed on staying calm and getting out fast”, said Stanford after her victory. “I knew there were a few strong runners on the field today and that it could be a sprint finish, but I was quite confident in my ability and didn’t worry too much, and that helped a lot”.

Champagne showers for the first hit of 2017! Fast & fun w/e of racing at #ChengduWC Suprised to take the tape against this speedy lot #panda pic.twitter.com/IJVNYNoEkL

Not surprisingly, with such short distances the men’s final was also a close affair, decided on the run, with Aussies Matthew Hauser and Luke Willian taking Gold and Bronze, separated by Rostislav Pevtsov (AZE)

Right after the race, Hauser said: “I’m absolutely stoked, it was my debut world cup after doing Gold Coast WTS a couple of weeks ago. I’m really pleased with the effort and I’m looking forward to the rest of the year”. “I knew I conserved a lot of energy yesterday in the heats and just did what I could to get to the final. I knew it was always going to be a running race today, so I tried to conserve on the swim and bike and save it for the run and I managed to execute the processes right”, explained.

While he may not have qualified for the final, Liam Lloyd will still be able to take some comfort from his weekend as he won the ‘B’ Final. 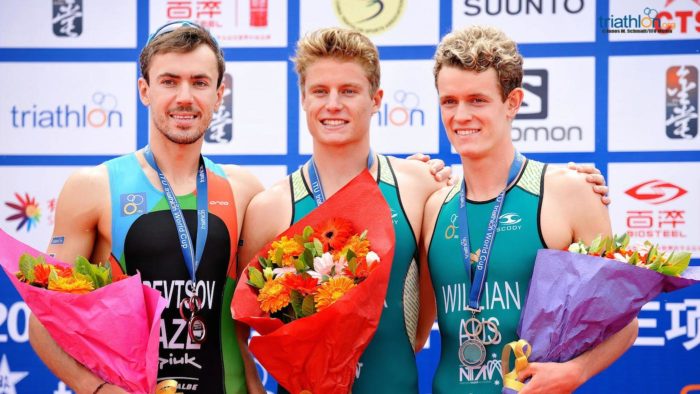