‘Complete’ performance from the GB youngsters in Nottingham

It was about time! If truth be told – and the facts don’t lie – Great Britain have been far from impressive in Senior Mixed Relay competition over the past 12 months. From second in Nottingham 12 months ago, the results sheets have not flattered for a nation which once won three ITU World Championship titles in four years between 2011 and 2014.

6th (Edmonton 2018), 4th (Hamburg 2018) and 7th (Abu Dhabi 2019)- plus 12th and 6th at the two European Championships since then – really is not reflective of the talent and support level that exists within the GB squad and the quality of the athletes we have.

Back on home soil was no better place to change that run of results, and the GB team of Georgia Taylor-Brown, Ben Dijkstra, Sophie Coldwell and Alex Yee were close to flawless on the banks of the River Trent.

From the time that WTS Leeds champion Taylor-Brown pulled clear from the first moments of the bike on leg one, the tactics were set – and her teammates did a fine job of building on the foundations that she set. They never looked liked anything but dominant winners. It was a pleasure to be there in person and call the race as the one-site announcer.

The persistent rain in Nottingham didn’t prevent the home nation, Great Britain, from returning to the top of the Mixed Relay podium after a dominant performance in the Accenture World Triathlon Mixed Relay Nottingham. With the event transformed to a duathlon relay due to the conditions of the River Trent, Team Switzerland earned silver and Team France claimed bronze.

After a morning when the clouds and the rain stayed away from the venue in Victoria Embarkment, it just just a few minutes before the start of the race when the rain showed up again, making the day even more complicated for the 14 teams lining up in Nottingham.

The 14 woman taking on the first leg of the race knew that, with some really strong runners in the line up, there was going to be no time for hesitation. Great Britain’s Georgia Taylor-Brown decided to make her move from the start, heading a long line of athletes into the first transition but leaving clear in first place, with Renee Tomlin from USA and Emilie Morier, from France, trying to stay close to her.

Georgia put her head down and, in wet conditions, showed that she has some serious bike skills. She built a lead over the chasers byt the end of the 7km bike leg of 23 seconds, from Team Australia, with Emma Jeffcoat, followed by Switzerland, Canada, Italy, Netherlands, Germany and France, all arriving at T2 together. In the last 1.5km run, cheered by the local crowds, Taylor-Brown showed why she won in WTS Leeds only six days ago with another fantastic run to handover to Ben Djikstra with almost a 30 second of a lead. 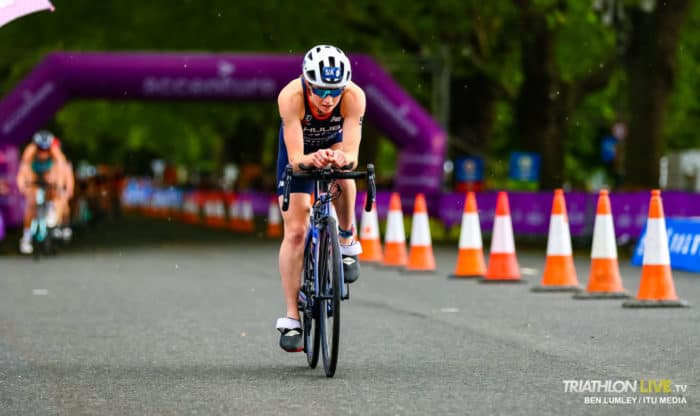 Renee Tomlin (USA) suffered with severe cramps in the second run, losing more than two minutes over the leaders, with Japan and Jure Ide even further back.

Djikstra managed to keep his lead on leg two while the chasers, lead by Dorian Coninx (FRA), had to slow down in the 180 degree turns on the bike course. After another fine combination of run-bike-run, the British team were leading by 36 seconds, with a group of six countries trying to secure their positions half way trough the race to keep on the dream of the podium. 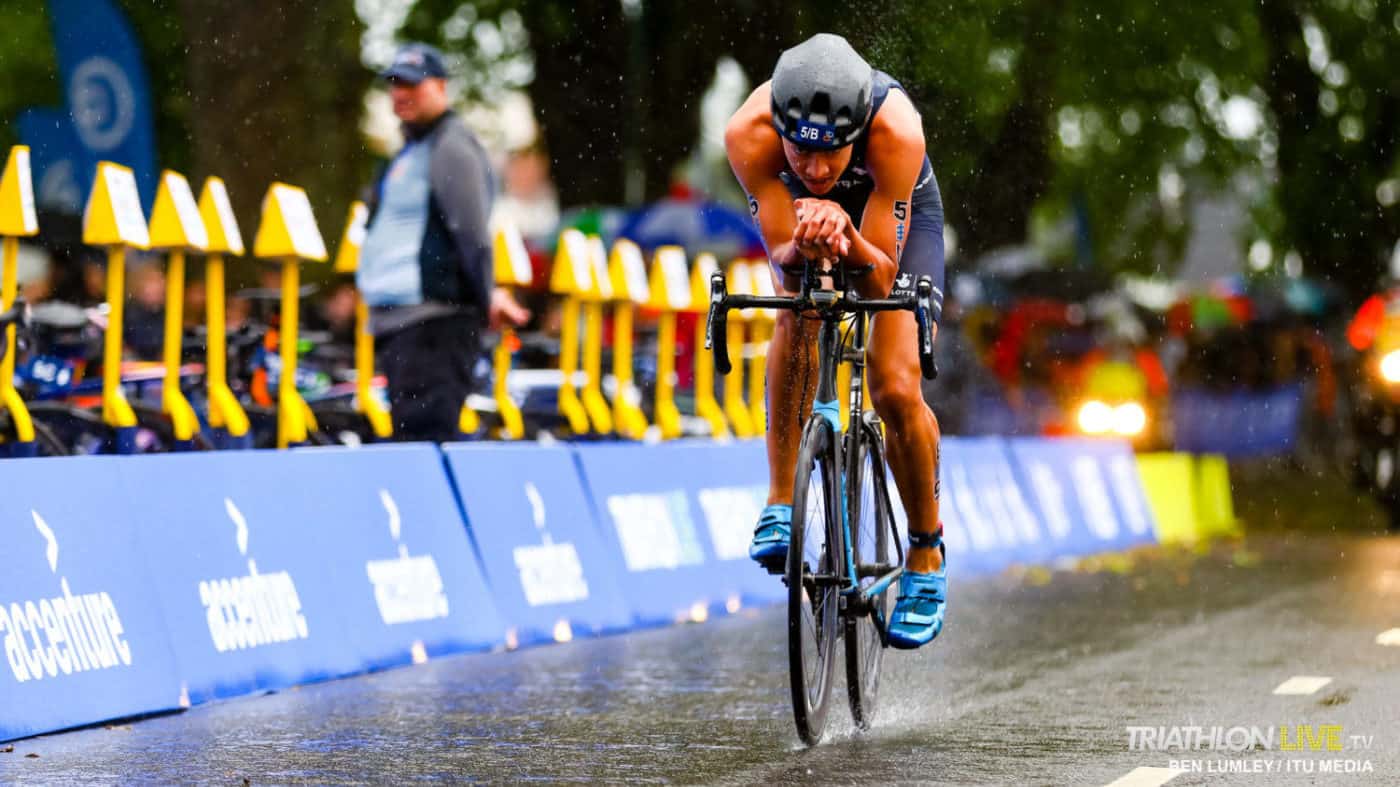 It was the third leg that proved to be decisive. For Team Great Britain, Sophie Coldwell maintained the lead to leave one of the fastest men on the WTS circuit, Alex Yee, to enjoy the last leg of the race. Behind Coldwell, the young Swiss athlete Alissa Koning had the performance of her life to bring her team through to the podium positions, with Leonie Periault (FRA) working hard in the last run to maintain second place for the current European and World Champions. Behind them, Italy, Canada and Germany were trying to stay in the mix. After the early difficulties for Tomlin, Tamara Gorman ran strongly to bring Team USA from the 13th place into the top 10.

Yee, a former World Junior Duathlon champion, was never going to be threatened with a healthy lead in a run-bike-run format. With a split in the first 1.5km of 4:16 mins and another 4:26 for the last run, he stopped the clock in 1:23:14, embracing his teammates with a massive smile on his face. 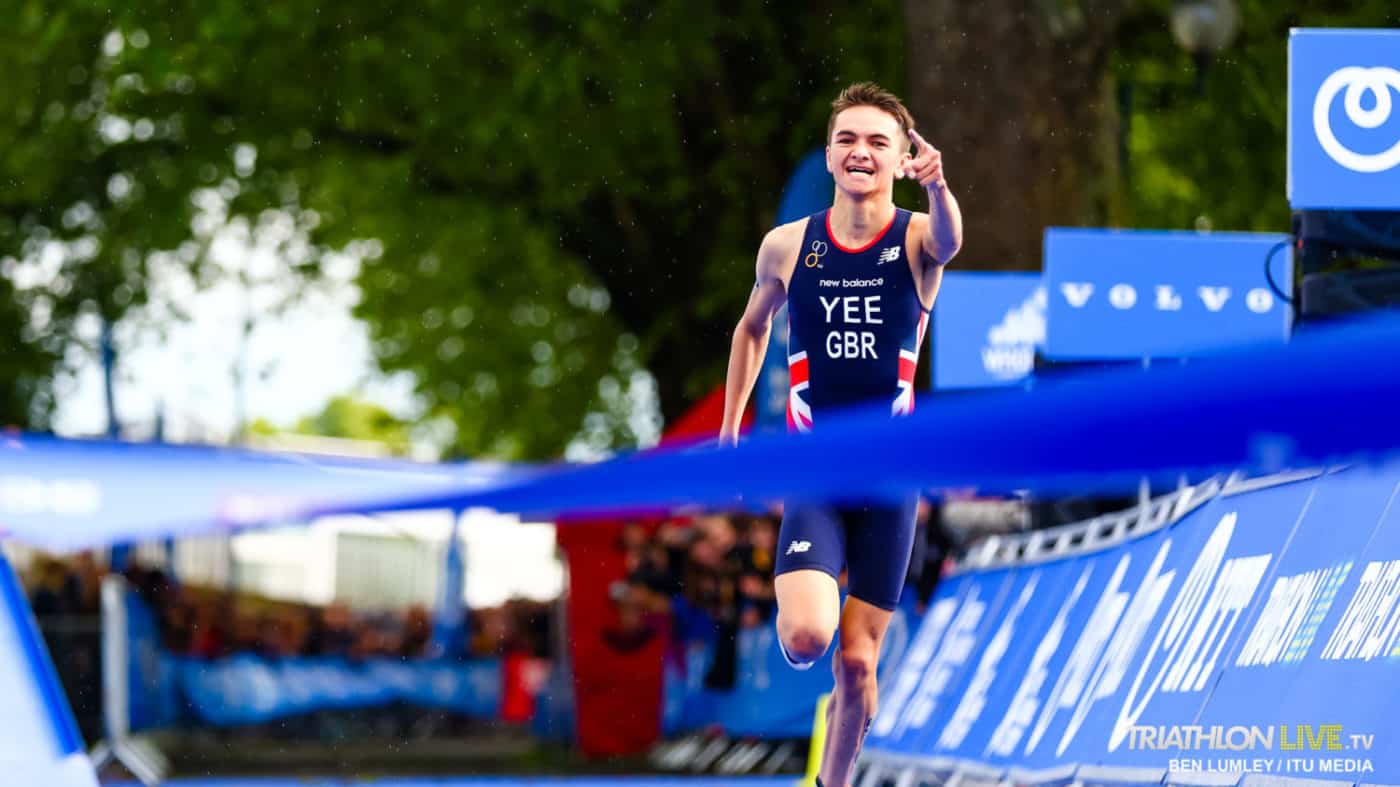 Behind him, Adrien Brifford produced a fine performance in the last run to claim the silver medal, the best place in the Mixed Relay Series so far for Switzerland. Behind them, Pierre Le Corre managed to keep the third place for France despite having a quite difficult transition and losing some precious seconds.

A fantastic last lap for Alexis Lepage brought the Canadians to the fourth place, with Germany, Italy, New Zealand and Australia following. 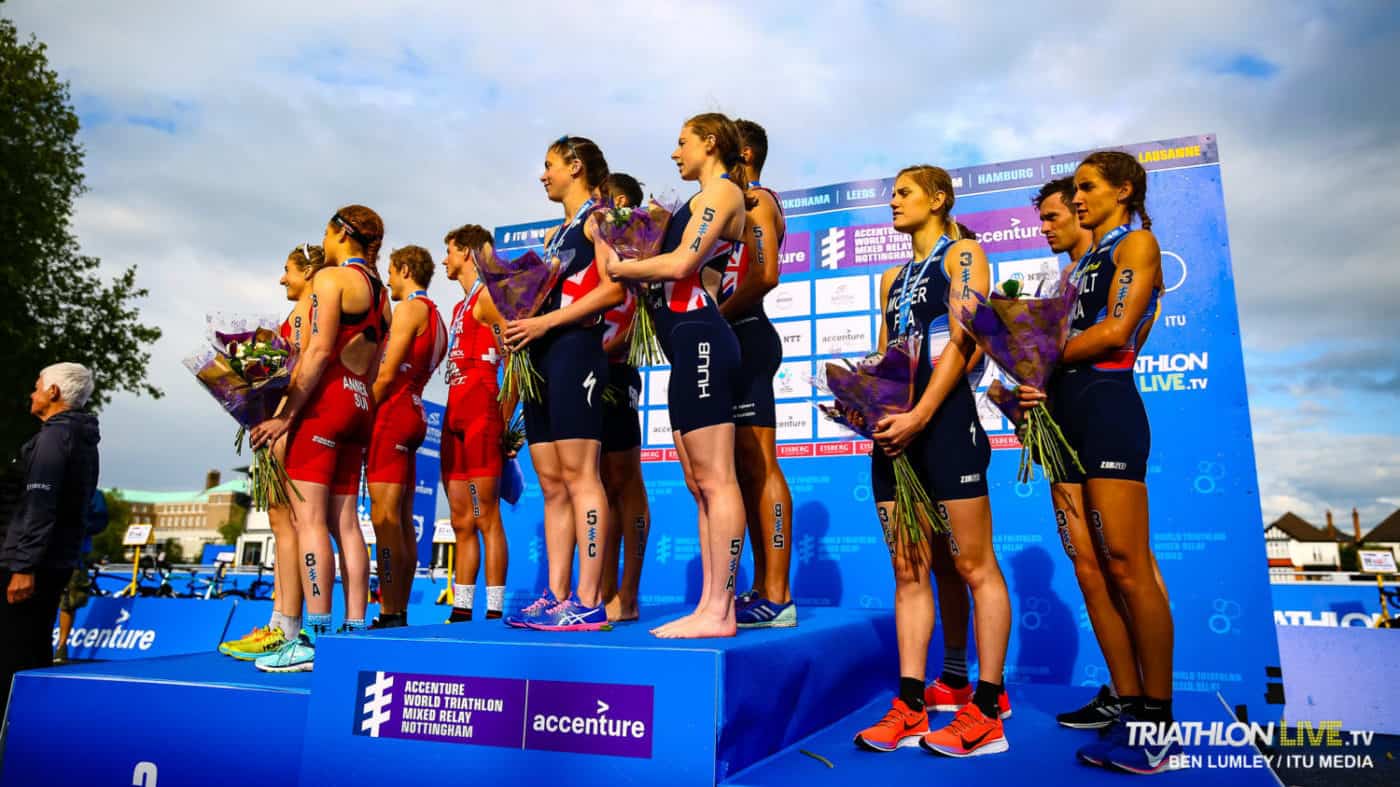