While he may be race #1 on the start list for Friday’s IRONMAN 70.3 Dubai, we have it on good authority from two different sources now, that twice Olympic Champion Alistair Brownlee will not be racing in the UAE this week. [UPDATE – this was officially confirmed at the Press Conference today at the Jumeirah Beach Hotel]

While the announcement of his entry made some headlines – notably for an expected showdown with Norway’s Kristian Blummenfelt, following his second victory at IRONMAN 70.3 Bahrain – that will have to happen on another day. Great Britain’s Adam Bowden – fourth in Bahrain behind the trio of Norwegians – will definitely be racing, hoping to kick-off his 2019 year after a great debut season over the Middle distance.

Further evidence towards Alistair’s (non) participation in Dubai is provided by the Brownlee Brothers website, screen shot below, which makes no mention of Dubai: 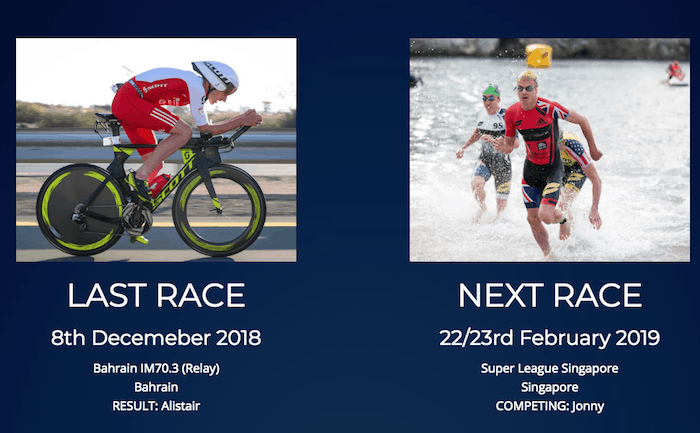 12 months ago, Alistair’s race in Dubai was a masterclass, winning over a quality field by more than six and a half minutes, combining a front pack swim with fastest bike and run splits to cruise to an impressive victory. After that great start to 2018, from there his season was a frustrating up-and-down one, a battle with injuries and getting fit again. Highlights were a Silver medal in that incredible race at the IRONMAN 70.3 World Championship, but not being able to start in Leeds, fourth at the ETU European Championships in Glasgow, tenth at the Commonwealth Games on Australia and a DQ at the ITU Grand Final reflect the difficulties of simply being able to train consistently on the run.

Whether this weeks news is injury or fitness related, we are not certain. It’s also worth bearing in mind the timing. With the Olympic Games coming up next year, Alistair has always said that the end of 2018 / early 2019 would be the time where he would decide whether Tokyo 2020 would be his major goal, or whether he would continue on his path of Middle / Long distance racing, with the ultimate goal of the IRONMAN World Championship.

Publicly at least, there has been no formal announcement on that decision yet. As the defending Olympic Champion, Alistair could secure guaranteed selection for Tokyo with a top three finish at the Tokyo Olympic Games Test-Event on 16th August under the British Triathlon selection policy.