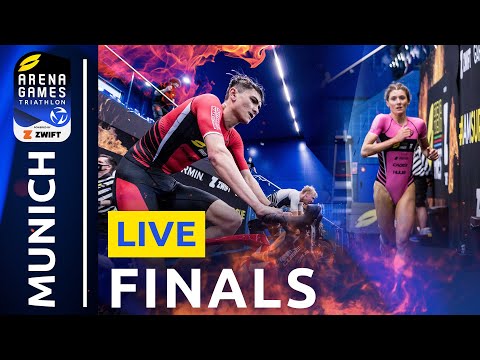 LIVE Blog
All the action & expert analysis from Munich

The Arena Games returned on Saturday in Munich – and a month from now, the first World Triathlon Esports World Champions will be crowned.

First up it was Germany, followed by London on April 23 and then the Grand Final in Singapore on May 7.

We brought you in-depth coverage right here, including embedded live streams (geoblocking applies) and our minute-by-minute updates which featured the expert analysis of elite athlete and coach Mark Buckingham.

First up are the heats (timings above), with the top eight qualifying for the women’s and men’s finals, which begin at 17:24 and 18:32 respectively local time.

All the action takes place indoors – the swim is four lengths of the 50m Olympic pool, the bike is 4km ridden on Zwift (via the athletes’ own bikes on Tacx NEO 2T smart trainers) and the run is 1km on a self-powered curved treadmill, again linked to Zwift.

In the heats, athletes will race twice and both stages will be in swim-bike-run format, with the second having a pursuit-style start based on times from the first.

The top three in the two heats plus the next two fastest will go through to the finals where there will be three stages, the second of which mixes things up with a run-bike-swim format.

Who was racing in Munich?

Beth Potter was one of the headline names in action in Germany and favourite for the women’s event.

She won in London last year and will face opposition from the likes of Anna Godoy and Zsannett Bragmayer.

While in the men’s race we could be in for another treat via the latest showdown between Marten Van Riel and Alex Yee.

Belgian Van Riel had the edge in this format 12 months ago but Olympic gold medallist Yee got his revenge over the course of a thrilling Super League campaign.

Make sure you join us on Saturday to find out who comes out on top this time!

Get up to speed

It’s exciting – but brutal – short format racing, perfect viewing for a Saturday and we’ve given you the inside track this week with a number of Arena Games features: