The second and final Qualifier event for Super League Triathlon’s (SLT) Championship Series takes place from Friday (17 August)-Sunday (19 August) this week in Penticton, Canada. Super League Canada is the first SLT event to visit North America, and will be the final chance for the pros to grab a ‘Golden Ticket’ – a lucrative contract for the Championship Series races.

With just 10 spots left up for grabs ahead of the main SLT season starter in Jersey this September (28-30), the athletes will need to give their all to be in with a chance of qualifying and competing against the likes of Flora Duffy (BER), Mario Mola (ESP), Katie Zaferes (USA), the Brownlee brothers (GBR) and Richard Murray (RSA); a selection of world-class talent who have all secured their spots for the season.

SLT pits the world’s best male and female triathletes against each other across unique and challenging short course formats throughout the league’s season; culminating in the ultimate champion of the Championship Series, crowned at the final event in Australia on 23-24 March 2019.

Penticton is the historic home of triathlon in Canada. Located in the south central region of British Columbia, in an area known as the Okanagan Valley, it is surrounded by beautiful wine country and is the perfect spot for racing and spectating.

The first event to test the athletes is the Equalizer; a two-stage event. Stage One is a stand-alone 20km time trial in the evening on Friday, 17 August. Stage Two of the Equalizer takes place on Saturday, August 18th and consists of an unconventional and unpredictable 500m swim – 2.5km run – 500m swim – 20km bike – 2.5km run. The finishing times from the two stages are collated to give the standings for the first of two races.

Penticton will also be hosting Age Group athletes for what’s set to be a remarkable weekend, with the amateur races being held from Friday until Sunday, giving budding triathletes the opportunity to race on the same course as the pros. To see the full Age Group schedule, visit Super League Canada’s website. 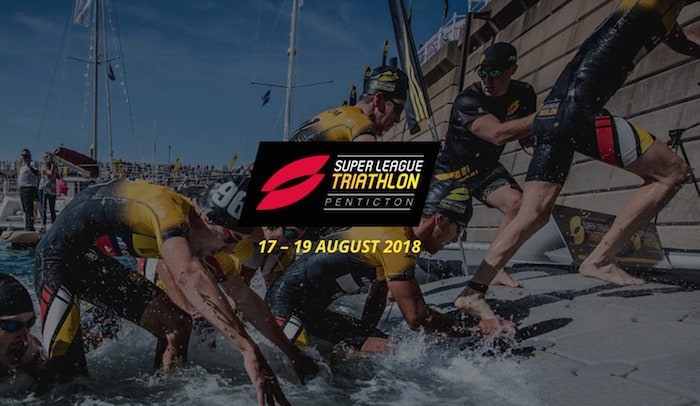 Who are the ones to watch for qualification?

The special thing about SLT is that the unique formats mean the results are surprising and unpredictable – it really is anyone’s game. That being said, multi-Ironman Champion and SLT Co-Founder Chris ‘Macca’ McCormack has a few predictions of his own as to who from Penticton we may see in Jersey this September: