Well that was a cracking race – and concludes what I think will be regarded as a very worthwhile event for the small British team that took the trip to Edmonton this past weekend for the penultimate World Triathlon Series event of the summer.

In many ways, Edmonton was the calm before the forthcoming storm, with the Tokyo Test Event and ITU Grand Final (Lausanne) to follow. That was reflected in for example only two of the top ten ranked women racing in the individual event on Saturday. However, a WTS win for Jonathan Brownlee over a strong men’s field and a – perhaps – surprising Silver medal in the Mixed Relay event on Sunday, will have provided lots of positives to take away before the business end of the season.

Despite the (very impressive) victory of the Great Britain team in the Nottingham Mixed Relay event in June, in truth, the Brits have not been making too many Mixed Relay headlines over the swim/bike/run** format over the past year, given our World Championship winning history and the strength-in-depth of the athletes on the squad.

(** Nottingham was a Duathlon format, remember!)

Right now, perhaps only Jonathan Brownlee would be considered a first-choice athlete in a full-strength GB Mixed Relay team, and that’s what to me at least, makes the performance of the squad, joined by Sophie Coldwell, India Lee and Gordon Benson, even more impressive.

Putting Coldwell and Brownlee on the first two legs was the smart move, as being ‘in the race’ from the start has been shown to be far more effective than trying to chase. They did their job well, Brownlee handing over to Lee with a 14 seconds lead – which India actually increased by a couple of seconds through the swim. Up against Taylor Knibb (USA) on the bike leg would be a tough challenge for anyone, but she rode well and would handover to Benson in second place, the young Kiwi squad now leading.

Hayden Wilde’s lack of swim direction cost him a few seconds in the water, bringing Benson, plus Hauser (AUS) and Pearson (USA) back into race-winning contention with just the final bike and run to go. Benson pushed hard from the start and along with Wilde, broke clear from Australia and USA, a move which would ultimately be crucial to their Silver medal. Hauser also went a fraction too early on the handover, incurring a 10-second penalty and ultimately costing a podium result for the Aussies.

Sure, the always impressive French team were absent and Team USA were missing the mighty Zaferes. However the Brits avoided the mistakes others made that get magnified in this format of racing, they raced tactically well and combined with impressive individual performances, the result was a team result that I would certainly consider above what might have been expected ‘on paper’. You can’t really ask for more than that. 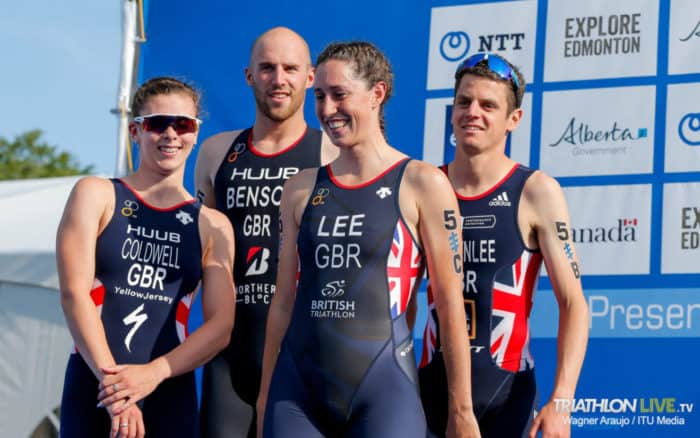 Coldwell took the first leg for the British team and came out of the swim into T1 in the top three. As the race entered the bike leg she showed her strength to remain in the leading pack.

She had a good T2 and although Summer Rappaport (USA) stretched the run out she tagged in Brownlee in second place. 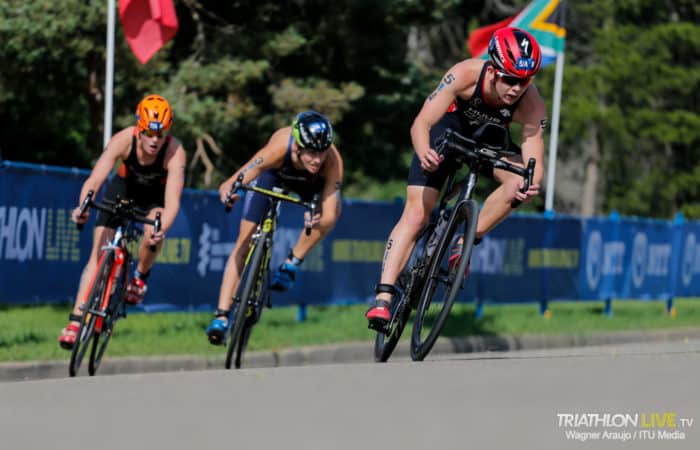 On the back of his victory in the individual event, he showed his hunger for more success by remaining within the leading pack throughout the race.

Brownlee had a strong bike leg before having a fast T2 to take the run out on his own. He went on to tag Lee with a 14 second lead. 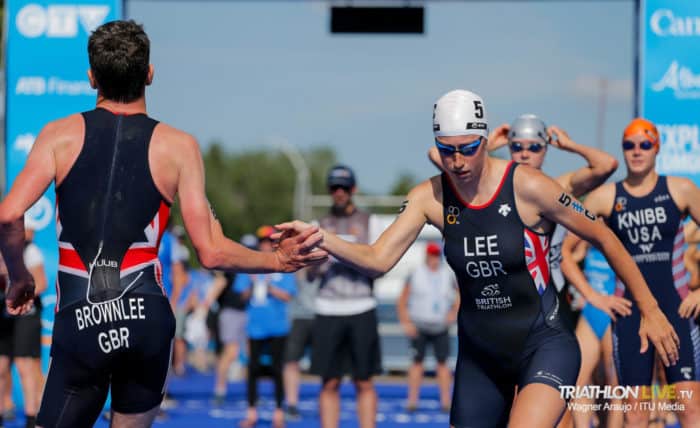 Lee extended her lead in the swim to 16 seconds but was being chased down by America’s Taylor Knibb and New Zealand’s Nicole Van Der Kaay. Knibb and Van Der Kaay were catching Lee in the bike leg and with one lap to go they’d closed the gap to six seconds. The Brit was caught and overtaken and came into T2 in third place.

Lee kept up with Knibb on the run while Van Der Kaay stretched out the lead as they tagged in the final athlete.

Great Britain’s Benson was tagged into the race in third place, 15 seconds behind New Zealand’s Hayden Wilde. Benson had an impressive swim and came out just one second ahead of Wilde, Morgan Pearson (USA) and Matthew Hauser (AUS). 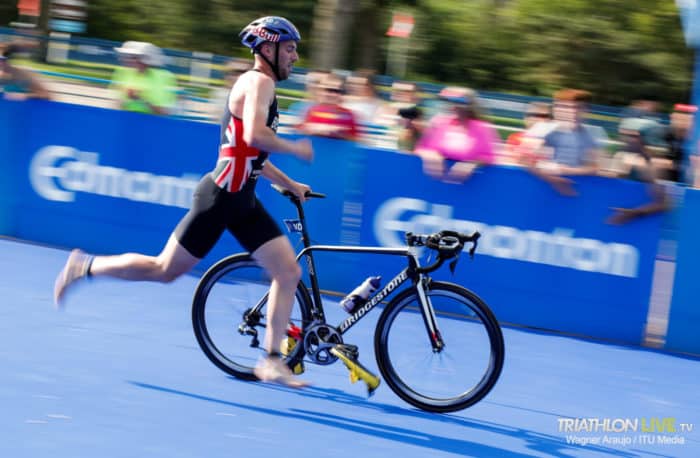 Coming out of T1, Benson was just behind Wilde and with one lap to go there was nothing to separate the pair.

Benson led the way out of T2 but Wilde began striding out and took the lead over the Brit. The British team took silver nine seconds behind the New Zealand team. 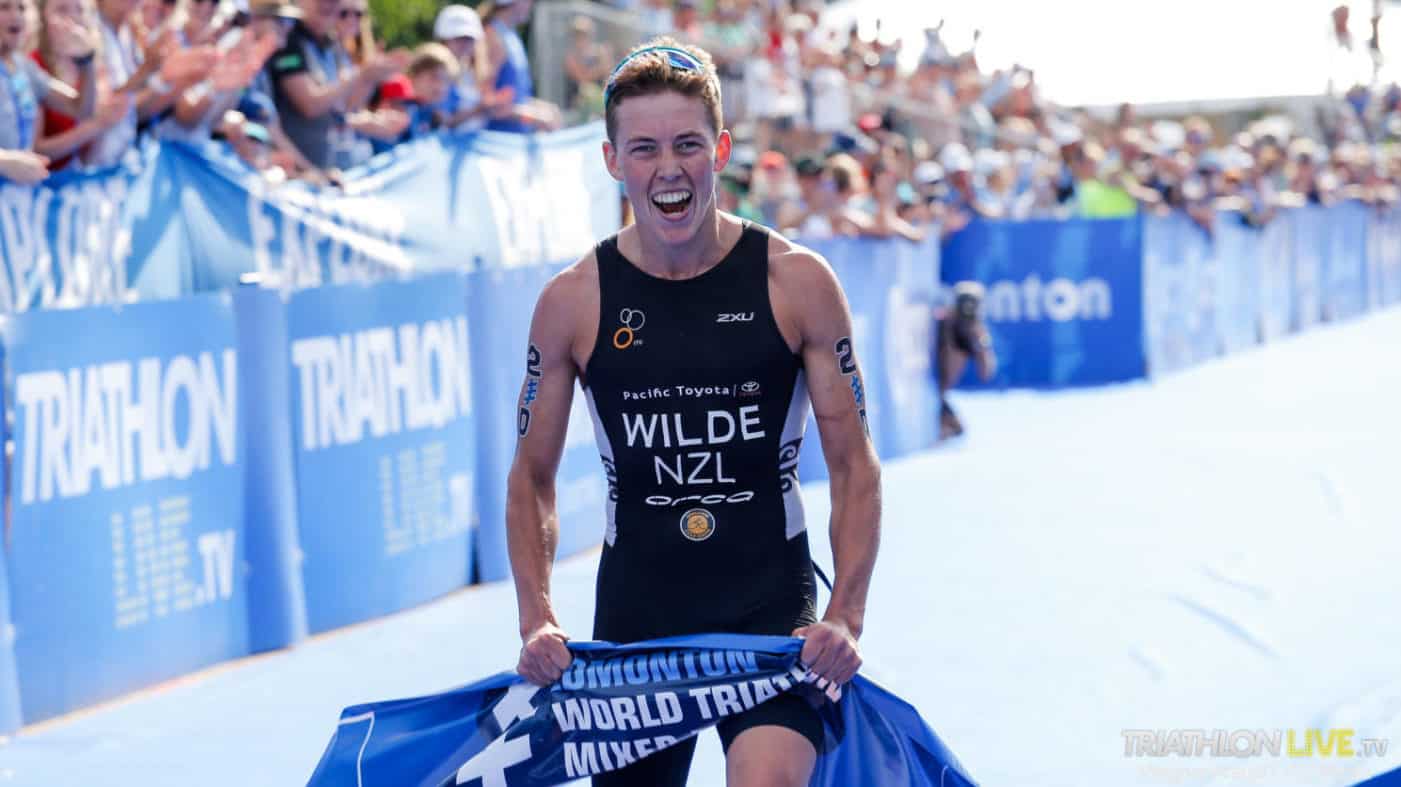 After the race, Benson said: “It was tough. You are always in a vulnerable position when you are out in the front. I wanted to hit the bike hard from the start and two of us got away and started working the gap. I just really enjoyed it to be honest. We are a great team.”

Lee said: “I was pleased with my bike leg. I did struggle a bit once the girls caught me up but once I got on to the run, I didn’t let them go because I didn’t want to let these guys down.”

Brownlee added: “I was tired earlier today but once I got going, I was fine. Relays are great fun and now I’ve been on the podium twice in a weekend. They’re a bit like buses these podiums but it’s been a good weekend.”

Coldwell concluded: “We’ve got such strength in depth so whatever team we put together; we hopefully have a good performance.” 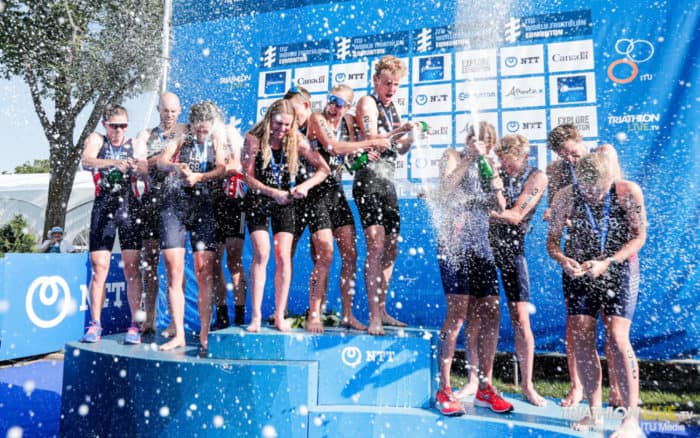