Gustav Iden claimed a brilliant victory in the 2022 IRONMAN World Championship in Kona on Saturday as he passed Sam Laidlow late to win a thrilling race.

The Norwegian finally passed the brave 23-year-old Frenchman with less than 5 miles remaining of a nailbiting classic in Hawaii.

Iden had already dropped his friend, compatriot and reigning IRONMAN World Champion Kristian Blummenfelt deep into the marathon before setting about running down long-time leader Laidlow.

Laidlow held on valiantly for a spectacular second place while Blummenfelt was forced to settle for third. Australian Max Neumann was another stellar performer in fourth.

The excitement was at fever pitch at 6.25am local time when the cannon sounded to start the first IRONMAN World Championship for PRO men at Kona since 2019.

Laidlow was quickly out in front and making smooth progress along with Germany’s Florian Angert and Dane Daniel Bækkegård. But they were unable to break free, instead heading a huge group of 19 which would exit the water just over 48 minutes later.

Angert officially was first out of the water in 48:15, virtually alongside Laidlow, but they had plenty of company with 19 athletes separated by just 15 seconds. Right in the thick of that group were pre-race favourites Blummenfelt and Iden. Also involved were Kiwi pair Braden Currie and Kyle Smith.

The second group of athletes began to exit the water around 1:20 off the pace, and it included Rudy Von Berg, two-time Kona king Patrick Lange, another big Danish threat Magnus Ditlev and American Ben Hoffman.

Further back in the field there was another group of big names all at around 4:30 off the pace – in it were Matt Hanson, Chris Leiferman, Cam Wurf, Joe Skipper, Sebastian Kienle and Lionel Sanders.

It was very much game on as they headed out onto the bike course, and the next big question centred on whether that huge lead group might attract drafting penalties in the aftermath of a penalty-filled women’s race on Thursday.

Swede Jesper Svensson was fastest through T1 and he headed out onto the pivotal bike leg in front, but Neumann quickly went to the front, followed by Svensson and Josh Amberger. Currie, Blummenfelt, Iden, Smith and Collin Chartier were all in close attendance.

The first mini-disaster of the day was to befall Chartier, who had a flat tyre early on the bike leg, but he coped with it admirably and was soon positioned nicely in the second chase group. Meanwhile up front Neumann led from Laidlow and they were followed by a chase group around a minute back. That included Angert, Ditlev, Blummenfelt, Iden, Bækkegård, Tim O’Donnell and Currie among others.

If we thought this race might pass off without the penalties which punctuated that women’s PRO race, we were very wrong. And before the field had covered even a third of the bike leg we had a slew of them. Notably for Angert, who had been right in the mix up front.

Up at the front Laidlow took over from Neumann who remained close behind, with still just over a minute then to the first chase group as they reached 30 miles on the bike leg. That group still contained the likes of Blummenfelt, Ditlev, Iden, Bækkegård and O’Donnell.

The first big move of the race came as the field approached 50 miles on the leg, as the phenomenon Ditlev blasted forward to eradicate the gap and take over at the front from Laidlow and Neumann, with Blummenfelt and Iden struggling to keep pace behind. The Norwegians were quickly 30 seconds adrift of their Scandinavian rival as he looked to lay down a marker.

Anybody who thought Laidlow’s moment in the blazing sun was over was badly wrong. The Frenchman took the lead again and started to take chunks out of the chasing pack. He was simply devastating on two wheels as he really poured it on during the second half of the leg.

Laidlow’s lead grew at every split and he was 6:15 clear of Iden into T2 with Blummenfelt and Neumann both 6:21 back. There was disaster though for Ditlev, who had picked up a five-minute drafting penalty and served it before he could enter transition.

The bike split for Laidlow was timed at a blistering 4:04:36 – more than four minutes quicker than the previous bike course record of 4:09:06 set by Cameron Wurf in 2018.

Wurf himself, and Frenchman Leon Chevalier, both broke that ‘old’ course record too as they entered T2 in fifth and sixth. They were 8:37 and 8:55 off the pace respectively.

Laidlow’s lead remained at more than 6 minutes as he headed out onto the run, with Blummenfelt and Iden running together in second and third. It seemed the dream matchup everybody had dreamed of was now on. Neumann obviously hadn’t read that script though as he passed the Norwegians to claim second spot before they bridged back up to make a chasing pack of three.

At this stage Iden and Blummenfelt had to be heavily favoured to finish 1-2 for Norway, but there was still work to be done. They were cutting into Laidlow’s lead – it was already down to 5:16 with under four miles covered. They moved clear of Neumann in the process.

Iden and Blummenfelt continued to go stride for stride, with their differing styles seemingly in perfect sync. Iden floating on air, and Blummenfelt with that buccaneering gait. They were gradually chipping away at Laidlow’s lead but the Frenchman was putting in an admirable performance at the front. He looked remarkably assured and still led by just over 3 minutes passing halfway in the marathon.

What had seemed inevitable when the marathon began didn’t quite seem that any more as they entered mile 18, but Blummenfelt and Iden then cut his lead down to 2:23 as Kristian injected fresh pace into proceedings. The tension was unbearable.

Mile 19 brought fresh drama as Iden stepped on the gas to drop Blummenfelt swiftly – going immediately 30 seconds clear of his friend and compatriot. He now trailed Laidlow by a shade under 2 minutes with just over 7 miles remaining.

Iden, looking fresh and strong, cut a big chunk out of Laidlow’s advantage to halve it to just under a minute as they moved to the end of mile 21. Blummenfelt’s victory bid appeared to be dead though as he now trailed by 2:24.

The pass by Iden now appeared inevitable as he had Laidlow clearly in his sights on mile 22 and he closed in rapidly. The gap was just 23 seconds at 21.4 miles.

Gustav finally claimed the lead on mile 23 as he passed the gritty Laidlow to take up the running – giving the 23-year-old Frenchman a high five, a pat on the back and a thumbs-up as he went past to show his respect for a remarkable performance from his rival.

Now the only remaining questions were how far Iden would beat the existing Kona course record – that 7:51:13 set by Jan Frodeno in 2019 – and whether Laidlow could hold on for a deserved second-place finish.

The first was answered emphatically by the brilliant 26-year-old from Bergen as he stopped the clock at 7:40:24. His marathon time was another Kona course record – an astonishing 2:36:15. The victory was a sweet one after illness had forced him out of the delayed 2021 running of this race in St George in May on the very eve of the event.

Laidlow recovered from the disappointment of losing his lead immediately and hung on superbly for second with Blummenfelt third. Neumann was a terrific fourth for Australia.

Britain’s Skipper finished well with a 2:45:26 marathon to claim fifth, ahead of Kienle who was a gallant sixth in the final World Championship race of his glittering career.

France’s Leon Chevalier was a fine seventh while Ditlev claimed eighth despite that five-minute penalty. Another Frenchman Clement Mignon was ninth with Lange 10th. 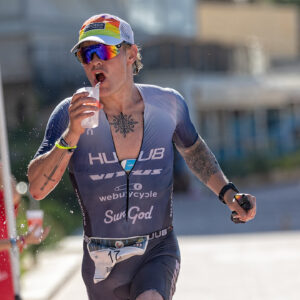 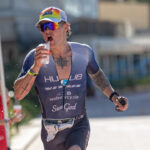