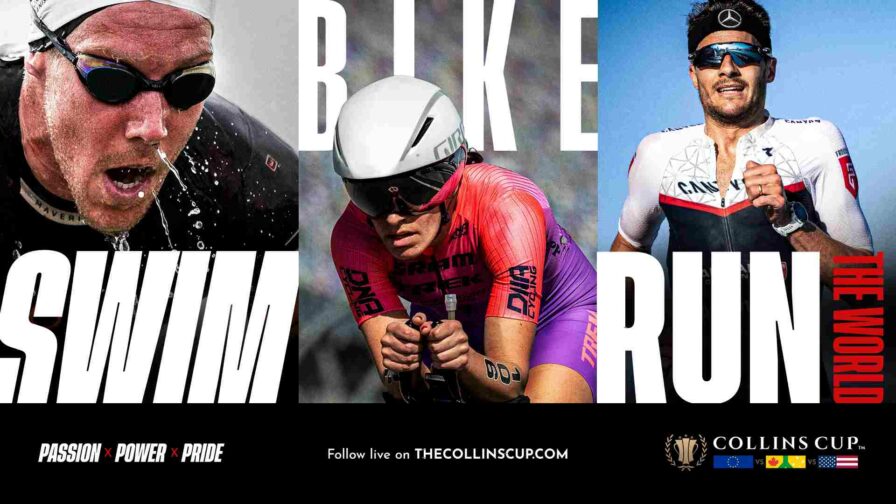 This is a preview of the 2021 Collins Cup in Samorin, Slovakia – you can click here for full report and results from Samorin.

The Collins Cup will see three ‘superpower’ teams made up of the world’s most elite triathletes go head-to-head in Samorin, Slovakia on Saturday (August 28, 2021).

In a format inspired by golf’s Ryder Cup, teams of 12 representing USA, Europe and Internationals will face each other over the course of 12 different long-distance races.

The event is being staged by the Professional Triathletes Organisation (PTO) in order to capture the imagination of both the die-hard triathlon fan as well as potential new converts to the sport.

By bringing together the sport’s leading athletes on the international stage, the competition seeks to showcase the drama, talent and tactics which triathlon entails.

The teams will each feature six women and six men, with the PTO World Rankings dictating four of the places for each gender.

Each team will be guided by captains, who are all former triathletes with glittering records in the sport. The final places on each team will then be selected through captain’s picks.

When is the Collins Cup?

Alongside the main event itself, the organisers are keen to showcase the weekend as an all-inclusive festival celebration of triathlon.

First scheduled to take place in 2020, the inaugural Collins Cup has been delayed on two separate occasions due to the COVID-19 pandemic, with a the date of August 28 now pencilled in the calendar.

How can I watch on TV and live stream?

We would love you to follow the race via our LIVE Updates but if you have to watch the race live the PTO reached an agreement with Eurosport to provide ‘multi-platform’ coverage across Europe of the inaugural Collins Cup event.

As part of the deal, Eurosport will broadcast the race in 20 different languages, including coverage on Eurosport 1 and 2 as well as the Eurosport App and the Discovery+ OTT Platform.

The entire seven-hour coverage will appear on Eurosport 2 on August 28 – simulcast on the Eurosport App. A shorter highlight show will air the following day on Eurosport 1.

The Collins Cup highlights and live coverage will also be aired cross the Asia Pacific region through Eurosport, as well as highlights in India. BT Sport will have highlights in the UK. Fox Sports and Kayo Sports will broadcast live in Australia.

In terms of talent, the PTO has gone big in hiring ‘The Voice of Cycling’ Phil Liggett to be the lead anchor for the broadcast.

A 2km swim, 80km bike, and 18km run course awaits the 36 competitors when they travel to Slovakia in late August and the state-of-the-art x-bionic sphere situated on the banks of the River Danube.

Each team will consist of 12 individuals – six male and six female. The starting lineups for the 12 individual races will be selected through a draft system.

This process would be repeated four times to fill the entire 12-race card. The process adds a tactical element to the Team Captains decisions – do they race the best athletes against best or do they save their star athletes for easier matchups and better chance of points?

Collins Cup teams: Who is in and who is out?

The PTO has a specific qualifying protocol dedicated to the event. The top four men and women for each team will earn automatic berths to the event based on their recent performances on the triathlon circuit during the qualification period.

Automatic qualifiers were confirmed on Monday August 9, 2021, while the four Captain’s Picks for each team were announced on Thursday August 12.

The matchups for Samorin were finalised on Draft Day in Slovakia – Wednesday August 25, 2021. They are as follows:

Can anybody beat Europe in the Collins Cup?

Pundits and commentators alike have Team Europe down as clear favourite for the competition. The team hosts (at the time of writing), the PTO-Ranked #1, #4, #7 and #10 athletes on the men’s side as well as the #1, #3. #4 and #6 athletes on the women’s side.

With Daniela Ryf and Jan Frodeno looking unbeatable at the moment, both would have to be considered sure-fire winners of their individual races in the Collins Cup right now.

However, the strategy involved in selecting competitors for individual races could allow Team Internationals and Team USA the opportunity to garner points through tactical decisions – but will that be enough to take the crown from Team Europe?

Why is it called the Collins Cup?

The competition is named after Judy and John Collins, who helped introduce the idea of long-distance triathlon events on the shores of Hawaii – which eventually led to the introduction of the IRONMAN World Championship.

The couple designed a course which took competitors around the idyllic island that tested the endurance of the ‘all-round athlete’. Initially based on the island of Oahu, the even comprised of the Waikiki Rough Water Swim, the Around Oahu Bike Race and Honolulu Marathon, which provide the origins of the 2.4-mile / 112-mile / 26.2-mile distances.

The original race around Hawaii consisted of 15 participants, planting the seed for the global spectacle that has become long distance triathlon.

The PTO was keen to honour the duo, and by naming this landmark event after John and Judy, a much deserved accolade for the founders of endurance triathlon.