Elite and Under-23 double Gold for Poland’s Alicja Ulatowska

There were two new names on the list of winners of the ITU Aquathlon World Championship today in Pontevedra, Spain.

Despite a swim of only 1km, a trio of three athletes – Kevin Tarek Vinuela (ESP), Martin Bau (SLO) and Ander Noain Lacamara (ESP) – were able to gain a not insignificant lead of 24 seconds over the field. World Triathlon Series veteran Dmitry Polyanskiy (RUS) was the next athlete to reach transition, leading a long line of athletes ahead of the 5km run. Typically a front pack swimmer at the highest levels, that deficit would prove costly.

The Slovenian, Bau, had a poor transition which left the two Spaniards ahead and it was Vinuela who hit the turnaround point on the first of two run laps first. Azerbaijan’s Rostislav Pevtsov was moving well from the chase group and by the end of the first lap he had reduced the lead of Vinuela to just 10 seconds with Polyanskiy now third, a further five seconds behind the Bronze medallist from the 2015 Baku European Games.

Pevtsov has extensive experience in the World Triathlon Series and the writing was on the wall; he caught the Spaniard early in the second lap, surged and quickly pulled clear. He was not going to be caught, but Vinuela held strong and would hold off the experienced Polyanskiy, to take the Silver medal ahead of the Russian.

Zsanett Bragmayer (HUN) was first through the swim in 13:43, but she had Alicja Ulatowska (POL), Márta Kropkó (HUN), Bianca Seregni (ITA) and Julie Lemmolo (FRA) for company. Cross Triathlon Bronze medallist, Nicole Walters, was down in 28th position and 2:18 back starting the run.

The race became a head-to-head between Bragmayer and Ulatowska and with just 200m they were locked together. As the blue carpet approached, the Under-23 Polish athlete unleashed a blistering sprint which Bragmeyer had no answer for. It was a great finish and behind, Itzel Arroyo Aquino (MEX) ran through to take the Bronze, to ensure two Under-23 athletes on the Senior podium. 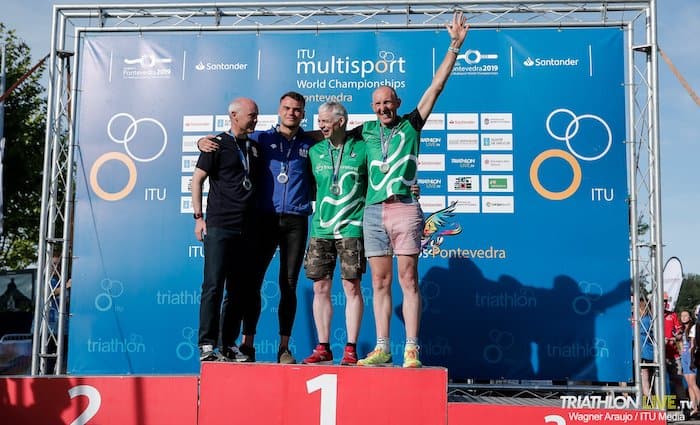