Few would likely have predicted it, but with just 2km remaining of the second run today at the Elite ITU Duathlon World Championships in Pontevedra, Spain, Great Britain’s Liam Lloyd was leading the race solo. 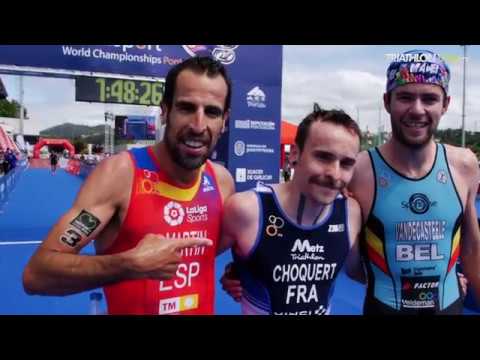 The opening 10km at the ITU Multisport European Championships saw the speedy French pairing of Benjamin Choquert and Yohan Le Berre open with a swift 29:07 run split, 50 seconds clear of a chase group of nine, which included the Welsh Commonwealth Games athlete. Great Britain’s other male Elite racing, Philip Wylie, lead the next group in around 20 seconds later.

Choquert and Le Berre were swept up on the bike to leave two significant groups, and the chasers – including Wylie – in turn were making inroads into their deficit. They were helped in particular by the efforts of Dutch Under-23 athlete, Thomas Cremers, who had finished the opening run 90 seconds back on the French duo. Those two groups did indeed come together and would see close to 20 athletes reach T2 together, but not before Lloyd attacked with a lap and a half of the bike remaining, and he was joined by the hard-riiding Cremers.

This was an ‘all in’ effort, and it worked. As Lloyd and Cremers came into T2, there was no sign of the chase group. Lloyd was first onto the run course with Cremers (not surprisingly), looking rather tired from his cycling efforts which saw him take the fastest bike split by some margin. That quickly left Lloyd on his own at the front.

When the gap to the chasers came up as 33 seconds, this was significant. Lloyd doesn’t run like Mario Mola (who does?!), but he’s an experienced athlete with a solid record in ETU competition and has been to major championships too. Interesting, very interesting!

From the chasers, Benjamin Chocquert was the athlete setting the pace and looking great, but as they started the second and final lap, Lloyd was still holding on to his lead. The Gold looked like it was going elsewhere, but could he hold on for a podium? Choquert went past and a kilometre later could start celebrating, but Emilio Martin (ESP) and Angelo Vandecasteele (BEL) were chasing and would finally pass Lloyd inside the final kilometre, eventually sprinting for Silver and Bronze, with the home turf providing added motivation for the Spanish athlete to secure another medal on his C.V. Lloyd finish fourth, just seconds later.

After finishing 5th, 5th and 6th over the last three years, Choquert secured his first World Championship title. No medal today for Lloyd, but he can be proud of his efforts which certainly provided great viewing through TriathlonLIVE.

Racing later in the afternoon, the small Pro women’s field saw last years Gold and Silver medallists, Sandra Levenez (FRA) and Sandrina Illes (AUT) away and clear, both clocking 33:10 over the opening 10km.

Levenez broke clear from Illes on the bike, leaving her with a huge lead of two minutes at T2. Her first World Championship victory was in Pontevedra five years ago, and her second at the same venue was now in the bag. She would make no mistakes on the final 5km run.

Illes was joined at T2 by Marion Legrand (FRA) and Garance Blaut (FRA) which the possibility of a French podium sweep. The defending champion however ran the fastest second run (16:47 versus the 16:58 of Levenez), to take Silver this year, with the podium completed by Blaut.