Held over distances of 3km / 120km / 30km, the Elite Long Distance Championships would see new champions today in the absence of Penticton winners Lionel Sanders (CAN) and Sarah Crowley (AUS). With a strong home entry, hopes were high for a Danish winner – and Helle Frederiksen duly delivered, stepping up from her Silver medal from 2017. With the championships heading to Pontevedra next year, quite appropriate to see a Spanish athlete taking the title in Denmark, the in-form Pablo Dapena Gonzalez.

More than three hours of biking changed almost nothing; the same leading four reaching T2 in close order, with Luxford, Pedersen and Frederiksen having been unable to drop the potentially speedy legs of the Chliean, Riveros. Vesterby, Thalund and Maja Stage Nielsen (DEN) were seven minutes back starting the run, surely making a podium finish a tough ask.

Frederiksen and Luxford were the quickest through T2, and within the first kilometre has set her stall out and taken the lead.

A huge focus for months, Frederiksen’s only goal today was Gold and she wasn’t going to play a defensive game to earn it. By 12km, Frederiksen was 1:23 clear, with Riveros now just seven seconds ahead of Luxford in the battle for second and third. While still in fourth, Pedersen was losing time and now 3:10 back.

Riveros maintained that gap for the next 10km, but Helle was not going to fade and added a few more seconds margin over the closing 5km to come home with a winning margin on almost two minutes over Riveros. Luxford completed the podium a further four and a half minutes later.

As he has done many time before, Estonia’s Marko Albert was first out of the 3km swim, but with Pablo Dapena Gonzalez (ESP) on his shoulder and Ruedi Wild (SUI) among those within 30 seconds at T1, the swim was not going to be a deciding factor.

The flat, fast 120km bike course would eventually see six athletes separate themselves at the front of the race. Wild gained a 30 second buffer at T2, but had Dapena, Albert, Giulio Molinari (ITA), Kevin Maurel (FRA) and Mathias Lyngsø Petersen (DEN) all set to make it a “three from six” for the medals.

Dapena Gonzalez has been in great form this year, focussing on the Challnge Family races where he was the winner in Gran Canaria and Lisbon. He caught Wild within the first 5km, and then at around the 10km mark put in a real surge to pull away. Looking absolutely fantastic for the whole run (with a fastest split of 1:47:39), he came home a clear winner. 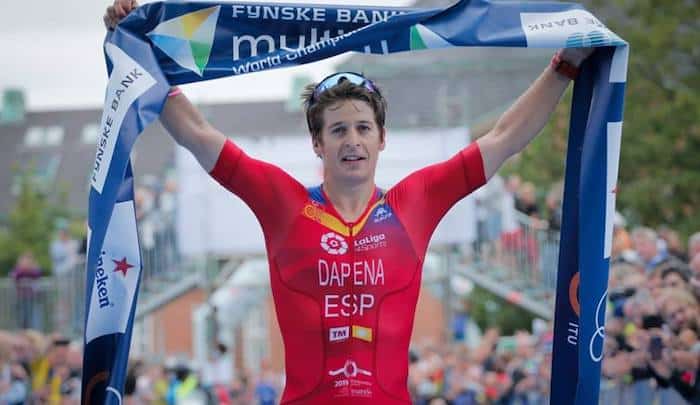